PJ HARVEY Part 1 – Thoughts On An Artist / The Trio Years

When PJ Harvey arrived on the music scene in the early ‘90s, I had absolutely no interest in a noisy trio fronted by a seemingly angry, venom-spewing, guitar-playing young English woman. My tastes were pretty varied at that point, but alternative (with or without a 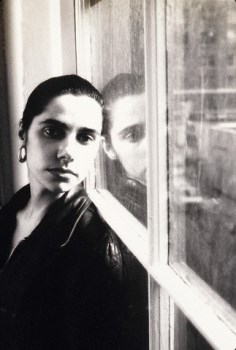 capital “A”) music was not something I responded to. Over the years I’ve come around to a lot of artists from that era, but it wasn’t until around 2003/2004 that I actually listened to PJ Harvey. Previously I had only seen a couple of her videos and they never made me want to buy her records. Then I read an interesting interview with Harvey in a British music magazine (probably Mojo), which peaked my interest, so I asked a friend to make me a CD compilation of her best songs. After giving that near-perfect 13-track CD several listens, I became enough of a fan to check out her back catalog (which by that time consisted of 6-7 albums). While no individual album stood out as a masterpiece, I enjoyed the fact that she constantly changed her sound & appearance but always managed to sound distinctly like herself. The first new album released after I became a fan was 2007’s White Chalk, a drastic departure even for her. Currently I think it’s my favorite of her albums, although that could change after revisiting her catalog over the next couple of weeks. One thing is certain: over the course of her eight studio albums (plus a collection of home demos and another disc of radio sessions), I will finally become familiar with the work of a singular talent who rarely if ever repeats herself.

I knew that her first couple of albums were recorded as a trio with Polly Jean Harvey on vocals & guitar, Stephen Vaughan on bass and Robert Ellis on drums & backing vocals, but 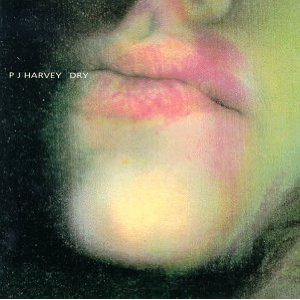 until this past week I wasn’t aware that they were actually a band called PJ Harvey, as opposed to a solo artist with her backing band. It was a smart move on her part, as she was able to continue as a solo artist under the same name after the trio disbanded. Recorded for independent label Too Pure and later reissued through Island Records, the band’s debut album, Dry (1992), is a tour-de-force with plenty of highlights. The term that kept coming to mind as I played it throughout the week is “controlled intensity.” “Oh My Lover” is a powerful way to begin a recording career, with a great dirty guitar tone and a slow-build arrangement. She knows what she wants from relationships, and makes it clear from the start that she’s no victim (“Don’t you know it’s alright? You can love her and you can love me at the same time.”). “O Stella” has a loping, slightly funky groove when the band joins in, with some excellent, understated drumming. I love the way she sings “Gooo-o-ooold.” “Dress” is a driving rocker with heavy bass & tom toms, and a cool hook at “If you put it on, if you put it on.” My favorite song on the album, and the song I most associate with PJ Harvey, is “Sheela-Na-Gig,” which begins subdued with chugging guitars, but eventually features snarling guitar and an all-around killer arrangement. It’s chock full of hooks, most notably the chorus (“Sheela-Na-Gig, Sheela-Na-Gi-IG, you exhibitionist”) and the repeated phrase “Gonna wash that man right out of my hair.”

“Hair” is moody and menacing, with a great 5/4 rhythm. Lyrically she sounds like a stalker, but that makes it intense and memorable. “Joe” is probably the fastest song on the album, with a driving 6/8 groove that matches early Smashing Pumpkins for aggression. Lyrically & melodically, there wasn’t much for me here, but it’s all about the rhythm section, especially Ellis’ drumming. “Water” returns to 5/4 time but feels completely different from “Hair.” In its sparse arrangement I hear similarities to Bruce Springsteen’s “Fire,” and I love her climbing vocal at “Waaaaaater.” The “controlled intensity” I mentioned above certainly applies to “Victory.” I really enjoyed the syncopated rhythm, bluesy slide guitar, and the way she sings “Vic-to-RY.” “Plants And Rags” includes slow strummed acoustic guitar (by Mike Paine), and the off-kilter sound of the cello shows a clear Velvet Underground influence. “Fountain” is an intense breakup song (“Stand under fountain, cool skin, wash clean, wash him from me”) with great dynamics and nice harmonies at the end. This is really a fantastic debut album, and one of the things that I’ve probably overlooked in the past (which I won’t do anymore) is just how good a guitar player Harvey is. I can hear the deep blues influence, but she’s coming from other angles as well. I’m very interested to discover how her playing style develops over the course of her career.

The trio returned a year later with Rid Of Me (1993), this time enlisting Steve Albini to produce. He’s probably best known for working with Nirvana on their final studio album,

In Utero (although he’s also a recording artist in his own right, and has produced & engineered hundreds of albums by countless artists), and his production style seems to be about capturing the raw sounds of the artist rather than putting some kind of sonic fingerprint on the music like so many producers do, as well as encouraging the artist to experiment with their voices and instrumentation. This album isn’t as immediately captivating as its predecessor, but at least half of its 14 songs are as strong as anything on Dry. “Missed” has an offbeat waltz feel, and I like how her voice moves from normal to falsetto and back. There’s a light drumbeat with excellent cymbal work, and it’s most raw and loud at “No I’ve missed him.” “Legs” begins like an overture, with fast guitar strumming and Harvey singing “Ohhhhh, you’re divine.” Her voice is fuller & huskier, even though she sounds like someone going through a breakdown (“I might as well be dead but I could kill you instead”). “Hook” is sludgy & grungy, with dirty guitars, a deep drum sound and a distorted effect on her vocals. Lyrically, it’s about a woman attached to the wrong man, and she feels stuck (“I was blind, I was lame, I was nothing ‘til you came”; “Lord he hooked me, fish hook & line”). The highlight of this album has to be “50Ft Queenie,” a swampy blues tune with Harvey showing a lyrical bravado that might reflect how she feels when she’s on stage. I especially love the falsetto vocals (with harmony) at “Glory, glory, lay it all on me…”

“Yuri-G” is a super-catchy song (“Yeah, I wish I was Yuri-G”) with distorted vocals. Although the titular character is a woman, I wonder if this is some sort of tribute to Russian cosmonaut Yuri Gagarin, especially with references to “Luna” and “moon.” “Ecstasy” is the biggest-sounding song on the album, like it was meant to be performed in arenas & stadiums. Her guitar playing is especially ferocious. The remainder of the album has some good moments, and there are probably fans who consider this her best work, but more often than not I was turned off by the raw production. “Rid Of Me” casts Harvey as the ex-girlfriend who won’t go away (“You’re not rid of me”), and includes the memorable “Lick my legs, I’m on fire, Lick my legs of desire” refrain. “Man-Size” appears twice, first as “Man-Size Sextet” with a dissonant string arrangement, and then as a more typical quiet-loud-quiet trio arrangement. Neither version is terribly catchy, but they’re both striking in their own ways. Dry is clearly my favorite of the two “trio” albums, but I can’t overlook the 7-8 truly memorable songs on Rid Of Me. These records are a great back-to-back listen. The biggest disappointment is that they’re the only albums recorded by this trio, since the rhythm section complemented Harvey’s songwriting so well. But all good things must end, and PJ Harvey (the woman) continued on her own. 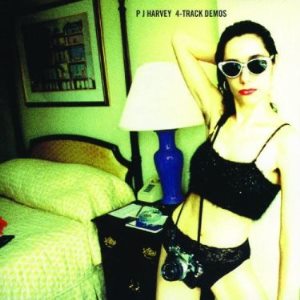 Before recording her first studio album as a solo artist, Harvey released 4-Track Demos (1993), a collection of her home recordings that includes 8 songs that appeared on Rid Of Me plus 6 previously unreleased tracks. Of the songs we’ve already heard, “Ecstasy” probably benefits the most from this stripped-back arrangement. It’s a powerful performance with some dirty slide guitar that reminds me of Led Zeppelin’s “In My Time Of Dying.” “Hook” doesn’t outstrip the studio version but it’s still stomping fun with a mammoth guitar sound. It also features nice organ splashes. It’s nice to hear acoustic guitar on “50Ft Queenie,” which is then joined by overdubbed electric guitar. This version is definitely the equal of its studio counterpart. “Rub ‘Til It Bleeds,” a song from Rid Of Me that I didn’t mention above, works much better in this scaled back but still intense arrangement. Also, “Yuri-G” comes across fully formed even though it’s simply vocals and guitar. Of the six new songs, “Goodnight” is the cream of the crop. It’s dark and moody, with surprisingly deep vocals and a sinister Jimmy Page-esque guitar riff. Without a doubt it’s one of my favorite songs from this batch of albums.

“Reeling” has choppy guitars, distorted vocals, and the repeated high-pitched “reelin’” refrain, while the phrase “Take me to the moon-a” puts her in Tom Waits territory. “Easy” is a simple song with a repeated 7-note guitar pattern and an excellent chorus, as she sings “Ea-sy” over loud guitars and “ha” vocal stabs. “Hardly Wait” is cool, moody & filled with angst. Although it could’ve fit on either of her previous albums, it needed to be fleshed out with additional instruments. “M-Bike” chugs along with some effective mood shifts, and lyrics about her man loving his motorcycle more than her (“Break her, break me, get rid of that goddamned machine”). 4-Track Demos is geared more to existing fans than newcomers. I don’t think I would’ve appreciated these early versions nearly as much had I not spent so much time with the first two albums. Although it may not be essential, “Goodnight” alone is worth the price of admission. 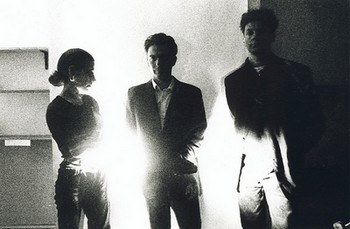 I don’t know her subsequent albums that well…yet…but I do know that her sound morphs and evolves. These early releases, though, showcase a fully formed, fertile musical mind, which is especially noteworthy considering she was still in her early-20s when they were recorded. I look forward to hearing what long-time fans think of this portion of her catalog. I imagine there are many people who lost interest after the trio split up, while others probably came on board after this. Feel free to share your thoughts in the Comments section, and stay tuned for my next post where I’ll discuss the three albums that followed.