Please join me on my journey as I re-discover artists from my vast & varied music collection (focusing on artists I’m less familiar with than my favorites). I’d like this to be an ongoing conversation with my fellow music lovers, some of whom will know a lot more about these artists than I do. But perhaps my journey will also help enlighten & inspire others. Only time will tell.

Personal Info
My name is Rich Kamerman. I was born in 1966, the year that saw the release of Pet Sounds (The Beach Boys), Aftermath (The Rolling Stones), Revolver (The Beatles), Sounds Of Silence and Parsley Sage Rosemary & Thyme (Simon & Garfunkel), Fresh Cream (Cream), Hold On, I’m Comin’ and Double Dynamite (Sam & Dave), Blues Breakers With Eric Clapton (John Mayall), A Quick One (The Who), Blonde On Blonde (Bob Dylan), as well as great albums by Buffalo Springfield, James Brown, Frank Sinatra, The Kinks, Frank Zappa, etc. 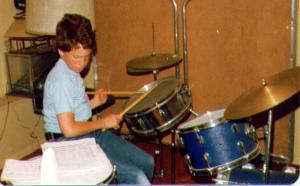 Of course it would be several years before I discovered the greatness of these now-considered classics. Throughout the early 70s it was Top 40 radio for me, along with my parents’ small collection of LPs (Meet The Beatles, Hank Williams’ Greatest Hits, Allan Sherman’s My Son The Folk Singer, the Fiddler On The Roof Soundtrack, a few classical compilations). By the mid-70s, between my first visit to the local record store and drum lessons that began when I was 8 years old, my obsession with music had started. Kiss & Stevie Wonder were my first two favorites. Now I can barely recall a time when I wasn’t listening to, or thinking about, music. I also had the pleasure of playing in the Staten Island Borough-Wide Orchestra when I was a teenager. I could actually read sheet music back then, until rock & roll took over.

Professional Info
After working at three different record stores (all in the same mall) throughout high school & college, I was fortunate enough to get a job at a major record label right after college. I spent 10 years at three different major labels, and another 17 years (and counting) as label manager & creative director at a classic R&B indie label and its sister label specializing in various-artist compilations and branded music.

I’ve also continued to play the drums. Gigging & recording, covers & originals, amateur & professional: too many bands to name. I never became a rock star, but I’ve had no complaints playing for fun, beer, musical satisfaction, and occasionally just for the money.

Between my jobs & drumming, I’ve worked with numerous record labels, musicians, producers, recording & mastering engineers, graphic designers, manufacturers, etc., which has given me the ability to appreciate & understand all aspects of music & the music business.

Why this blog?
For more than 40 years I’ve collected music: LPs, cassettes, a few 8-tracks, and lots of CDs. I also realized a long time ago that I’m a “completist”: I enjoy hearing everything (or close to it) by the artists I like. It’s cost me a lot of money, and taken up a lot of shelf space, but I enjoy getting a thorough overview rather than just a greatest hits compilation and one or two “key” albums. My collection now numbers over 8,000 titles. That’s a lot of music, and I’m proud to say that I’ve listened to it all.

However, recently I was thinking of all the artists whose catalogs I own but don’t know very well. I’ve spent so many years accumulating music, and once I’ve listened to an album one or two times, it tends to go on the shelf and…with the occasional exception…is rarely played again. I’ve often wanted to spend some time revisiting these lesser-known artists and albums, but I’ve only done that in very small doses.

I’ve created this blog to document my journey of re-discovery. I will choose one artist at a time, explore their entire catalog (or at least the large portion of the catalog that I already own), and post my thoughts and observations. I will discuss my before-and-after impressions of every album after playing them several times, and I hope it will be interesting to see where my opinions on each artist have changed…or have been reinforced…as I delve into their back catalog. As mentioned in my Mission Statement, I’d like this to be an ongoing conversation with my fellow music lovers, so I look forward to hearing from you in the Comments sections.

Where to start?
I decided to start this journey with Van Morrison. Somehow I’ve accumulated over 35 of his albums, yet I only knew a handful of them relatively well. I recall enjoying certain albums more than others, but there were many of his albums where I couldn’t name a single song. Also, Astral Weeks tends to be considered his best album by fans & critics alike, yet after listening to it at least once a year for the last 15-20 years, I’ve never experienced the “genius” that others have. I enjoy it, but it always left me feeling a little cold. My plan was to save Astral Weeks for last, and perhaps after re-evaluating his other releases first, I hoped to gain a new perspective. Please read the Van Morrison posts to see how that turned out.

Where to next?
I created a poll so my readers could help me decide which artist’s catalog to revisit next, and the winner was Talking Heads. Thanks to everyone who voted. After that, I moved on to The Band, followed by Roxy Music, Paul Simon, Joni Mitchell (who won the next poll), Television, David Bowie, Nick Drake, Black Sabbath, Big Star, Tom Waits, The Beach Boys, Foo Fighters (who won the following poll), Uncle Tupelo, PJ Harvey, Neil Young, Alice Cooper, XTC, Metallica, The Jayhawks, The Kinks, The Stooges, Al Green, Syd Barrett, k.d. lang, Daryl Hall & John Oates and Toto. I recently wrote about My Favorite Debut Albums in a 5-part series.

I also introduced a series called “Compilation Or Catalog?” where I revisit “Best Of”/”Greatest Hits” compilations by certain artists and ask you to help me decide if the compilation is sufficient or if I need to hear any of their individual albums. So far I’ve covered The Commodores, Montrose, Jimmy Buffett, Echo & The Bunnymen and The Cure in this series. In a twist on this concept I wrote about my “gateway compilations”: the ones that already convinced me to dive into each artist’s catalog. The first two posts in this mini-series can be found here: Part 1 and Part 2.

I began a series on my favorite one-album artists. Each post contains ten examples of these One And Done artists. If you enjoy that series, I followed it up with a single post on two-album artists called Two And Through (naturally).

If you’re a fan of The Eagles or The Blues Brothers, I invite you to check out the individual posts I wrote about each of them via the hyperlinks on those artist names.

Each week throughout 2016 I highlighted my favorite albums from 1986 (along with others I discovered later on) in a series called Thirty Year Thursday. In 2017 I focused on my favorites from 1977 each week in Forty Year Friday.

I rarely know what my next series will be until shortly before I begin them. Feel free to subscribe so you won’t miss a post.

Thanks for stopping by!

302 comments on “About KamerTunesBlog”