Satur-debut – CRASH TEST DUMMIES “THE GHOSTS THAT HAUNT ME”

Two years before Canada’s Crash Test Dummies had a worldwide smash with “Mmm Mmm Mmm Mmm” from their sophomore album, they released their 1991 debut The Ghosts That Haunt Me, which was a massive success in their homeland but flew under the radar everywhere else.  I already discussed this album, which is every bit as unique & wonderful as its follow-up, in the third Great Out Of The Gate post back in 2015, and I’ve included that write-up below. 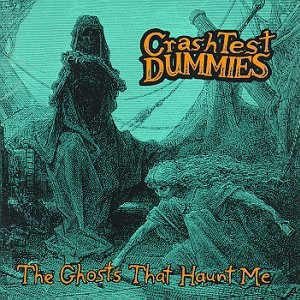 From GREAT OUT OF THE GATE Part 3:

Crash Test Dummies are widely regarded as one hit wonders, and that hit (1993’s “Mmm Mmm Mmm Mmm”) is considered a novelty by many people. While it’s true that they only had that one hit single in the U.S., they enjoyed wider success in their home country of Canada, and there’s a lot more to their music than just one song. Lead singer Brad Roberts’ deep baritone is the band’s most prominent distinguishing feature, but it’s his quirky, thought-provoking and often humorous songs, along with the haunting backing vocals of keyboardist Ellen Reid, that make them truly special. I fell in love with them the first time I heard their debut and its leadoff single, “Superman’s Song.” That melancholy ode to the Man Of Steel was unlike anything I had heard before, and a similar mood pervades the acoustic waltz of “Androgynous” and the surprisingly uplifting dirge that is album closer “At My Funeral.” They also display an affinity for folk, country & Celtic music on tracks like “Comin’ Back Soon (The Bereft Man’s Song),” “Here On Earth (I’ll Have My Cake),” “Winter Song” and “The Ghosts That Haunt Me.” Prior to last week I hadn’t played this album in several years, and I was pleased to discover that everything I loved about it all those years ago remained. I was grinning ear to ear the entire time.

Who else still enjoys this band nearly three decades after their first record? If you first discovered them via the aforementioned hit single, did you ever check out more of their music? Their one-of-a-kind sound isn’t for everyone but, for many of us, once you enter their world you never want to leave.