Satur-debut – THE ALARM “THE ALARM (EP)”

The Alarm is the second artist from Wales to appear in this series, following John Cale as a member of The Velvet Underground. The four Welsh musicians who made up The Alarm created a powerful & unique sound that was an integral part of the ’80s for me, and I still love it all these years later. I love everything the original quartet released, and even the later lineups that only included lead vocalist Mike Peters continued to make excellent music, but I return most often to their first EP and full-length album. The former was highlighted in the fifth Great Out Of The Gate post and you can read my comments below. 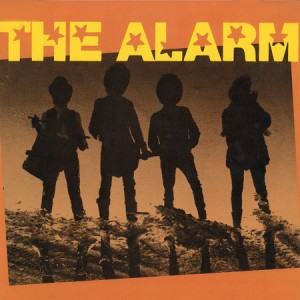 From GREAT OUT OF THE GATE Part 5:

This 5-song EP was part of a triumvirate of releases in 1983 that introduced me to a new generation of great bands, the others being Big Country’s The Crossing and U2’s War. In an era when robotic rhythms & icy synths were the prevailing sounds, these guitar-based bands were a breath of fresh air. The Alarm was probably the most consistently rousing of these groups with anthemic, Clash-inspired songs that cried out for audience sing-alongs. Lead single “The Stand” has an almost military vibe with its call-to-action chorus (“Come on down & meet your maker, come on down & make the stand”), and the other three studio tracks (“Across The Border,” “Marching On” and “Lie Of The Land”) have a similar urgency & immediacy. Mike Peters shares lead vocals with guitarist Dave Sharp (Peters would eventually become The Alarm’s full-time singer when their record label insisted on one frontman), and the rhythm section of bassist Eddie MacDonald & drummer (Nigel) Twist give the songs just the punch they need. The EP closes out with the live track, “For Freedom,” offering a glimpse at one of the most captivating concert attractions of their era. Had I disqualified EP’s from contention in this series, their 1984 full-length debut Declaration would surely have been included. The Alarm continued for nearly a decade before splitting up, and Peters has recorded & toured as The Alarm with a new lineup for the past decade, while also replacing the late Stuart Adamson as lead vocalist in Big Country for a few years.

Who else loved (and still loves) these guys? Were you also listening to the other bands I mentioned? If their commercial peak was before or after your time and this is your first exposure to them, please let me know your thoughts on the songs embedded above.

Satur-debut will continue in 2020. Until then, I hope everyone enjoys whichever holiday(s) you celebrate, and Happy New Year to my readers, fellow bloggers and all your loved ones.