When Led Zeppelin officially disbanded at the end of 1980 following the death of drummer John Bonham, fans were left wondering what the future had in store for the three surviving members. Guitarist Jimmy Page emerged first with the excellent Death Wish II soundtrack in early 1982 but it was vocalist Robert Plant who had the first post-Zeppelin commercial success a few months later. His solo debut, Pictures At Eleven, combines elements of his ’70s “golden god” rock star persona with a sleeker new wave sound that he would continue to embrace across his next couple of records, and the cover image is the ideal visual to accompany this music. You can read about why I love this album so much below, which was previously included in my Great Out Of The Gate series. 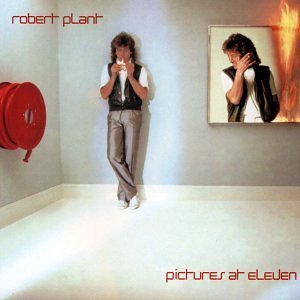 From GREAT OUT OF THE GATE Part 2:

It should come as no surprise that I was thrilled when the lead singer of my favorite band began his solo career two years after Led Zeppelin disbanded. Aided by his friend Phil Collins on drums (former Rainbow drummer Cozy Powell played on 2 of 8 tracks), Plant collaborated with guitarist Robbie Blunt on a collection of tunes that veer from Zeppelin heaviness (“Slow Dancer” and “Like I’ve Never Been Gone”) to offbeat new-wave inspired rockers (“Burning Down One Side,” “Fat Lip” and “Pledge Pin”) and an exotic ballad (“Moonlight In Samosa”). A lot of wonderful albums were released in 1982, but I don’t think I played any of them quite as often as Pictures At Eleven. Plant’s voice was still in its prime, the musicianship is top-notch (Blunt is a sympathetic & tasteful guitarist and Collins is, of course, one of the best rock drummers of all time) and there’s not a weak song to be found. I love the majority of the dozen or so albums he’s released to date, and this one remains among my 2 or 3 favorites.

I was fortunate to see Plant on his first solo tour at Madison Square Garden in 1983, after the release of his sophomore album, The Principle Of Moments. Although I had never seen Led Zeppelin and would have enjoyed hearing some older songs, I also applauded his decision to only perform songs from his two solo records. I remember a lot of people screaming out Zeppelin song titles throughout the concert but I was content to only hear his solo material. How do fellow Zeppelin fans feel about his debut? And is there anyone out there who prefers his solo career?