Prior to releasing his eponymous debut album in 1982, Detroit native Marshall Crenshaw’s biggest claim to fame was playing John Lennon in the touring musical Beatlemania between 1978 & 1980. Two years later this collection of 11 original Crenshaw songs and 1 cover tune impressed critics & fans alike, selling hundreds of thousands of copies in the U.S. Over the years I’ve seen it show up on countless lists of all-time best debut albums (including my own, obviously) and, even though his discography is filled with incredible music, a lot of people only seem to know this one. I suppose if you’re going to own one Crenshaw album this should be the one, but for me it was just the entry point into a decades-long love of his unique songwriting, heartfelt vocals and greatly underappreciated guitar playing (I’ve seen him in concert numerous times and he could play lead guitar for almost anyone…he’s that good). Although I only mentioned six of its songs in the Great Out Of The Gate series (see below), every moment of this record is pure melodic bliss. 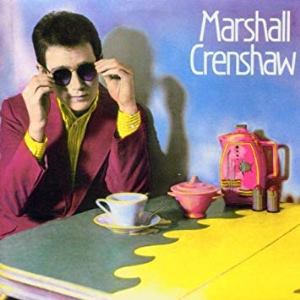 My introduction to the music of Marshall Crenshaw came via a cover of his “Someday Someway” by rockabilly singer Robert Gordon, which was a minor radio hit in 1981. A year later I heard Crenshaw’s version on his debut album and was initially disappointed in the simple, sparse arrangement, but I quickly came around and realized that it was merely a different approach. The entire album is full of songs that sound simple due to the basic guitar-bass-drums trio set-up, clearly an homage to his similarly bespectacled hero Buddy Holly, but there’s a lot of diversity in the songwriting. You won’t find a weak track here, with plenty of highlights like “Rockin’ Around In N.Y.C.,” “Cynical Girl,” “There She Goes Again,” “Mary Anne” and the melancholy-yet-uplifting “Not For Me” (my personal favorite here). There are other Crenshaw albums I enjoy as much as this one, but for the uninitiated his debut is the perfect place to start.

I’m curious if my fellow Marshall Crenshaw fans rate this as his best or if, like me, you consider his entire catalog essential? I realize there might be some readers who weren’t previously familiar with him, so what do you think of the songs embedded above? Does it make you want to hear more?