Steely Dan was an integral part of the soundtrack of the ’70s for me and millions of music fans, and their split after 1980’s Gaucho…which lasted until their 1993 reunion…marked the end of an incredible string of Gold & Platinum albums. Along with guitarist/bassist Walter Becker (who passed away in 2017), keyboardist/vocalist Donald Fagen co-wrote dozens of brilliant songs that straddled the lines of rock, pop, jazz, lounge, funk and almost any other genre you can think of. I previously wrote about their classic 1977 album Aja in a Forty Year Friday post, so my love of their music will come as no surprise to anyone who has previously visited KamerTunesBlog. Two years after they disbanded Fagen released his debut solo album, The Nightfly, which I consider to be the equal of anything in the Steely Dan catalog thanks to a combination of Fagen’s unique voice & keyboard work, stellar playing from a who’s who of studio musicians, immaculate production and eight instantly memorable songs. There aren’t many albums I own in multiple configurations, but I’ve got this one on CD, reissued vinyl and DVD-Audio with a stunning surround sound mix. 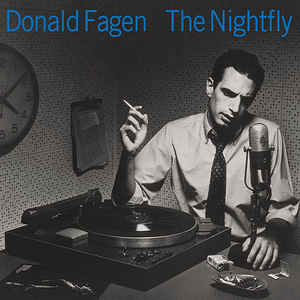 Donald Fagen may have had an advantage heading into his solo career, having been half of the creative duo behind Steely Dan throughout the ‘70s, but that doesn’t diminish what he accomplished with The Nightfly. Some fans might have seen this as a continuation of his work with “The Dan,” but it has a unique feel that separates it from anything in that band’s catalog. Sure, he surrounded himself with top-notch studio musicians like they did on Aja and Gaucho, but the subject matter seems a lot more personal than anything he had previously recorded. From the late-night disc jockey in “The Nightfly” to the bouncy lounge-jazz of “The Goodbye Look,” from the faithful cover of Lieber & Stoller’s “Ruby Baby” to the radio hit “New Frontier” (whose lyrics were my impetus for checking out the music of jazz legend Dave Brubeck more than three decades ago), this has been one of my desert-island discs for as long as I can remember. I’ve enjoyed his other solo albums and his work with the reunited Steely Dan, but none of them have struck me with the same intensity as The Nightfly.

I wonder if there are any Steely Dan fans out there who missed this record? If so, I advise them to pick up a copy as soon as possible. If you’re a Dan fan and already know The Nightfly, how would you rate it against their catalog…as well as the rest of Fagen’s solo work?