It’s been nearly eight years since I revisited the discography of legendary quintet The Band for a 5-part series. They were only the third artist I wrote about, following Van Morrison and Talking Heads, and I was still figuring out how in-depth I wanted my posts to be. Between their debut, 1968’s Music From Big Pink, and its eponymous follow-up, there were so many great songs & performances that I couldn’t hold back and went into much more detail than I had originally planned when I started this blog a few months earlier. That set the stage for the verbose approach I’ve continued since then, so credit (or blame?) goes to the five members of The Band for creating such incredible music right from the start: Robbie Robertson, Levon Helm, Rick Danko, Richard Manuel & Garth Hudson. My appraisal of their debut, originally written in May 2011, is featured below. 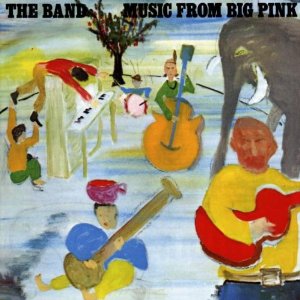 It’s not easy deciding where to start a discussion about The Band. They may have been known for their work with Bob Dylan in the mid-60s…but no one could have predicted how immediate and long-lasting their impact on the music world would be when they recorded under their new name. Their music simply sounded like nothing that came before it. What exactly made them so special, and why does their music still endure more than 40 years after their first album? I suppose they were just the right combination of musicians at the right time, with an amazing collection of songs.

I already knew several songs from Music From Big Pink fairly well. “Tears Of Rage” is a wonderful song, but a strange way to begin a debut album, its dirge-like tempo and the aching vocals of Richard Manuel and Rick Danko are not something you would expect to immediately grab many listeners, but it works. “The Weight” (which most people probably know from its familiar “take a load off, Fanny” refrain) is one of the songs that The Band are best known for, even to casual fans. In the sequence of the record, it’s also our introduction to the lead vocals of drummer Levon Helm, who brings a Southern twang to their sound (and is their most effective rock ‘n’ roll voice). My favorite part of this song, however, is Rick Danko singing “I said, wait a minute Chester…” in the fourth verse. That slight crack in his voice gets me every time. “Long Black Veil” is an old country ballad (from 1959, but it sounds much older), which tells an interesting story about a man sentenced to death for a murder he didn’t commit. His only alibi is that he was sleeping with his best friend’s wife, a secret he takes to the grave. I always enjoyed the melody, but sometimes paying attention to the lyrics can enhance your enjoyment of a song, as it did for me here. “I Shall Be Released” is a Bob Dylan song that I always thought was sung by Rick Danko, but it’s actually Richard Manuel. On the surface he may be singing as a prisoner waiting for his release, but it also seems to be about a spiritual release, or possibly even death (as a release from his earthly burdens). Deep stuff, and a powerful way to close out the album.

Those were just the songs I was already familiar with. Most of the others made significant impressions on me these past couple of weeks as well. The haunting keyboard sound on “In A Station” that drew me in is a combination of

clavinet (to be popularized by Stevie Wonder on his string of brilliant early-70’s albums) & electric piano that sounds like a psychedelic harpsichord. Great vocals from Manuel on this track. “Caledonian Mission” features a pleading Danko vocal performance with high harmonies by Manuel. “Chest Fever” is an odd one here. I really like this song, but the deep organ sound (courtesy of Garth Hudson) & heavy drums make this more like a Deep Purple or Vanilla Fudge song (albeit without wailing vocals or screaming guitar solos). I can imagine even staunch fans of The Band having issues with this song, but it works for me. I can also hear a direct line from the vocal harmonies to those of Eric Clapton and Bobby Whitlock on the Derek & The Dominos Layla album. During “We Can Talk,” I enjoyed the shift to a shuffle beat at around the 1:35 mark, as well as the strong vocal harmonies. “Lonesome Suzie,” a mournful ballad written and sung by Manuel, and the Dylan-Danko composition “This Wheel’s On Fire” are two more songs that made a strong impression on me.

Robbie Robertson was eventually considered the leader & driving force in The Band, but Music From Big Pink comes across as a more democratic album than anything else they would release. Robertson is an excellent guitar player, very underrated in fact. He rarely plays a traditional “solo,” and even when he does it’s usually not predictable. You can hear Eric Clapton’s influence on his playing, but he has more of an angular approach than the blues-based Clapton. Robertson would begin to take control on the next album, writing or co-writing all 12 songs.

Do you agree that this is a classic debut album and possibly one of the all-time best? Even though this post is about that album, do you think their sophomore release is even better?

27 comments on “Satur-debut – THE BAND “MUSIC FROM BIG PINK””