[Welcome to Forty Year Friday, the weekly series on my favorite albums of 1977]

I’m cheating a bit with this selection because it wasn’t actually released in 1977, but since it was recorded and initially scheduled to be released that year I decided it was a worthwhile inclusion in this series. Plus it’s my blog and I make the rules here so no one can stop me (insert evil laugh here). By 1977 the duo of Daryl Hall & John Oates (whose discography I revisited in a 5-part series in 2014) had released a half-dozen albums and scored three Top 10 singles (“She’s Gone,” “Sara Smile” and “Rich Girl”). Even though they weren’t yet the prolific hitmakers they would become in the following decade, they were an established group and their record label (RCA) expected them to crank out pop hits. Hall, their main vocalist & keyboard player, was itching to explore other musical terrain, so he connected with an unlikely collaborator: Robert Fripp, the mastermind behind progressive rock legends King Crimson (who were on an extended break at the time). The music they created wasn’t a million miles away from the direction Hall & Oates was heading in, but RCA felt it wasn’t commercial enough & could alienate the group’s fans, so they put the album (Sacred Songs) on the shelf for three years until it was finally given a proper release. Had they waited a little longer it might have been more successful, but it hit shelves a few months prior to the release of H&O’s ‘80s-defining album Voices, and by then it was all but forgotten. I was fortunate to find a used LP of Sacred Songs in the late-‘80s and have loved it ever since.

It’s a completely different beast than his 1986 sophomore solo album, Three Hearts In The Happy Ending Machine, which was included in the final post of last year’s Thirty Year Thursday series. With Fripp on board as producer, as well as contributing his inimitable guitar sound and his one-of-a-kind “Frippertronics” sound effects, and a band consisting of Elton John cohorts Caleb Quaye (guitar), Kenny Passarelli (bass) & Roger Pope (drums), Hall delivered a set of songs that’s edgier 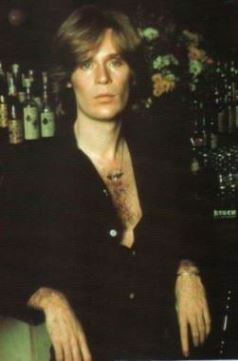 and less “blue-eyed soul” than anything he had previously released…yet much of it is as catchy as anything he was doing with Oates. “NYCNY” is one of the album’s defining songs; a great driving angular new wave tune with a pulsing 4/4 groove, Fripp’s fierce guitar work, call-and-response vocals in the chorus (“NY love me, NYC I see, NY why me, am I NY?”) and a moody half-time bridge. Fripp re-recorded this song (with a new title & different lyrics) on his first solo album…which prominently featured Hall on vocals…two years later. “Something In 4/4 Time” is another driving rocker with a new wave vibe and a memorable chorus (“Ya gotta have something in 4/4 time, ya gotta have something, gotta have something that rhymes”). I especially love Hall’s falsetto vocals and the cool Frippertronic breakdown. Album opener “Sacred Songs” is a bluesy rocker with barroom piano that reminds me of David Bowie a la “Suffragette City.” This might be the closest he comes to sounding like Hall & Oates but his vocals have a harder edge.

Several songs have extended running times, which is unsurprising when you have a founding father of prog rock at the helm. “Babs And Babs” falls just shy of 8 minutes, and is notable for its arrangement, which shifts from a bouncy midtempo rhythm to an icy cool atmosphere through the outro, and includes some killer guitar work (likely by Quaye) followed by more Frippertronics. There’s some impressive playing by everyone on “Don’t Leave Me Alone With Her,” while Hall alternates lyrics about “choosing my priorities” and “the art of changing our perception” with group vocals (“levels” and “stages”). “Survive” is the brightest song on the album, moving effortlessly from

Fleetwood Mac-esque acoustic guitar to a piano-led glam-rock groove. I love the vibe but it didn’t need to be 6-1/2 minutes long. Hall sounds like his one-time producer Todd Rundgren on the soulful “Why Was It So Easy,” a slow ballad with a repeated ebow melody and a loping rhythm that briefly changes to a sparse guitar-and-organ section. Three shorter and softer songs round out the track listing. “Urban Landscape” is a Frippertronic instrumental and “The Farther Away I Am” is soft & serene with just keyboards & voice above a King Crimson-like synth bed. The album closes on an incredible high note with “Without Tears,” a gorgeous slightly jazzy piano ballad with a pretty melody and Hall’s magnificent vocals. I could imagine Stevie Wonder performing this song, especially the “earth magic” part. I was thrilled when Sacred Songs was re-released on CD about 2 decades ago with a couple of bonus tracks, making this music readily available again. Musically it fits in nicely with other 1977 releases, yet in many ways points the way forward to the next decade. Fripp fans who might have dismissed Daryl Hall as simply a pop singer are in for a pleasant surprise, and Hall & Oates fans with open minds should find a lot to love here as well.