YOU RIP, YOU SHRED – My Favorite Drummers Part 1 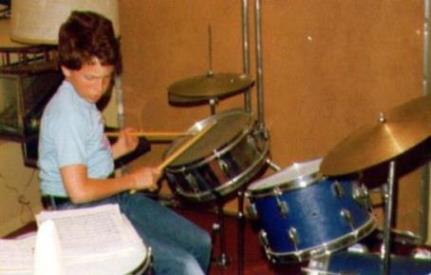 I had my first drum lesson 42 years ago this month and drumming has been in my blood ever since. Although I’ve always been a part-time musician (preferring to have a full-time job and the paychecks that came with it), I still managed to play in a couple dozen bands and jammed with too many musicians to remember, in basements, rehearsal studios and on stage. Rock stardom was never my goal (except maybe when I was a teenager), which is good because I would have been very disappointed otherwise. For me it’s always been about the thrill of making music with other like-minded players, whether we worked on original or cover songs. I consider myself a very good drummer. That might sound boastful but when you’re passionate about something and you do it for more than 4 decades, you better have some proficiency and not be ashamed to admit it. I’ve always enjoyed playing with musicians who are better than me so I can step up my game and, even though I’ve become more of an in-the-pocket “groove” drummer over the years, it’s fun to show off my chops from time to time.

Sometime in the late-‘80s I had just completed a gig with my power-trio cover band. We were eating at a diner when someone who attended the show asked if I was the drummer. When I said “yes” he exclaimed, “Oh man…YOU RIP. YOU SHRED!” I had never heard those words used in this context before, so I asked him if it was a compliment. Thankfully it was, 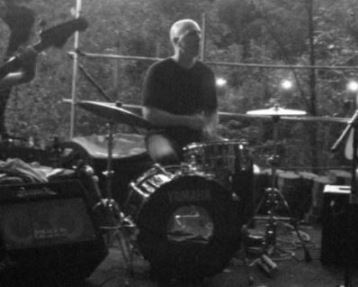 and I was pleased to know that someone enjoyed my playing. With that story in mind, I’ve decided to write a multi-part series on the drummers who have inspired, influenced and in some cases intimidated me over the years. This is not meant to be a “best drummers of all time” list, but a celebration of the ones who have made the greatest impact on me. I’m starting out with four guys who are likely among the favorites of nearly all drummers (and other musicians) of my generation. Each entry will include a brief paragraph and an audio &/or video sample of them in action. In subsequent posts I’ll feature some more predictable choices as well as other players with lower profiles outside the drumming community. In various ways I believe that all of these drummers rip & shred. 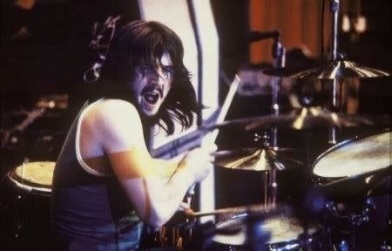 By far my biggest drumming influence from my all-time favorite band. I used to emulate his sound a lot more when I was younger but I still marvel at his combination of power, groove, swing & finesse, and I try to incorporate that into my own playing. He has a reputation as a heavy-hitting hard rock drummer, but he was equally adept at subtlety. From “Good Times Bad Times” in 1969 to “I’m Gonna Crawl” in 1979, he brought something unique to every song he appears on (with “Whole Lotta Love,” “Since I’ve Been Loving You,” “When The Levee Breaks,” “Over The Hills And Far Away,” “D’yer Maker,” “Achilles Last Stand,” “Nobody’s Fault But Mine” and “Fool In The Rain” being particular favorites). His death in September 1980 at the age of 32 had a big impact on me as a 14-year-old who never had a chance to see Led Zeppelin in concert, and I often wonder how much more amazing music he (and they) would have recorded if he was still alive. It’s no surprise that they officially disbanded a few months after his death, stating that “we could not continue as we were.” Most other bands would have hired a new drummer and carried on but Bonham’s contributions were too important, and other than a few one-off performances they’ve never had a full-fledged reunion.


Drummer: KEITH MOON
Best Known For: THE WHO 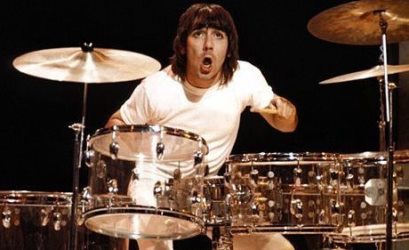 As teenagers, my friends & I would argue about who was the best drummer in the world, John Bonham or Keith Moon. In hindsight that was obviously a waste of time since they were both great and didn’t need to be pitted against one another. Moon’s ferocious playing was unlike anyone before or since, flailing around the kit at breakneck speed, often sounding like he would fly off the rails but somehow landing on the right beat (any live performance of “Young Man Blues” is a perfect example of this). It helped that his rhythm section battery-mate was the stoic & virtuosic John Entwistle, who was able to keep songs anchored while Moon did his thing. I’ve always had fun playing along with Who songs even though I can never quite capture his manic energy. There are highlights aplenty throughout The Who’s catalog: “A Quick One, While He’s Away,” “I Can See For Miles,” “Sparks,” “Won’t Get Fooled Again,” “Love, Reign O’er Me” and “Who Are You” immediately come to mind. His 1978 death (like John Bonham, at only 32 years old) solidified his legend. Unfortunately the man often referred to as “Moon The Loon” took the lyrics of “My Generation” too literally: “I hope I die before I get old.” 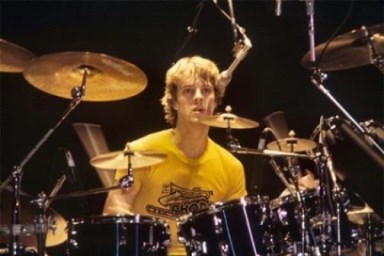 When I first became aware of The Police around 1979 they were like nothing else I had heard before. The songs were great and Sting’s voice was something to behold, but the reason they made such an immediate impact on me was the one-of-a-kind drumming of Stewart Copeland. Growing up in the Middle East exposed him to a lot of music that other rock drummers were probably unaware of, incorporating multiple “world music” influences into his reggae-on-steroids attack, topped off by the intricate hi-hat work that became his signature. He made his first splash playing with progressive rock band Curved Air for a couple of years prior to forming The Police, and he’s done a lot of great soundtrack work during & after the group’s split in the mid-‘80s, but his reputation rests firmly on those five Police studio albums and their energetic live performances (two of which I was fortunate to see, in 1982 & 1983).  Songs like “Roxanne,” “Next To You,” “Message In A Bottle,” “Walking On The Moon” and “The Bed’s Too Big Without You” wouldn’t have been as impressive without his distinctive drumming…and those are just from their first two albums. “Driven To Tears,” “Spirits In The Material World” and even the simplicity of “Every Breath You Take” are just a few of many Copeland highlights from their last three albums, and I’ve always been impressed by the snare drum crack during the final verse of “Wrapped Around Your Finger,” which subtly but definitively propels the song towards its conclusion. He also did incredible work as a solo artist (using the name Klark Kent, which I previously discussed here), as well as later bands like Animal Logic and Oysterhead. 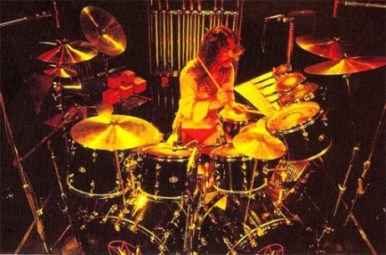 One of the great musical pleasures of recent years has been the mainstream acceptance of Canadian progressive rock legends Rush, who have been in the upper echelon of my favorite artists since I first heard “Entre Nous” on the radio in 1980 and subsequently bought its parent album, Permanent Waves. I was already in awe of Neil Peart’s drumming by the time I saw them on the 1981 Moving Pictures tour, but experiencing that musicianship in person sent my appreciation to a whole new level. Here was someone who didn’t just bash away at his drums; he carefully composed every part, every rhythm, every fill (in addition to writing all the band’s lyrics). He’s long been considered the gold standard for rock drummers and you can point to just about any song in their discography as evidence. When he joined the band for their second album, 1975’s Fly By Night, he transformed them from an ambitious but somewhat derivative hard rock band to something entirely different, essentially inventing the concept of progressive-metal over the course of the following decade. He wasn’t the first drummer to use a massive drum kit but he turned it into an art form, with perfectly tuned drums and an array of percussion instruments that were individually credited in their album packaging (orchestra bells, bell tree, timpani, gong, cowbells, temple blocks, wind chimes, crotales, etc). He also paid tribute to the great Buddy Rich with the Burnin’ For Buddy concerts & albums that brought attention to the multiple drumming legends that took part in those sessions. Although, as I stated above, you can listen to just about any Rush song to hear his drumming mastery, “2112 Overture/The Temples Of Syrinx,” “Xanadu,” “La Villa Strangiato,” “Freewill” and “YYZ” are the perfect primers for those unfamiliar with Mr. Peart. 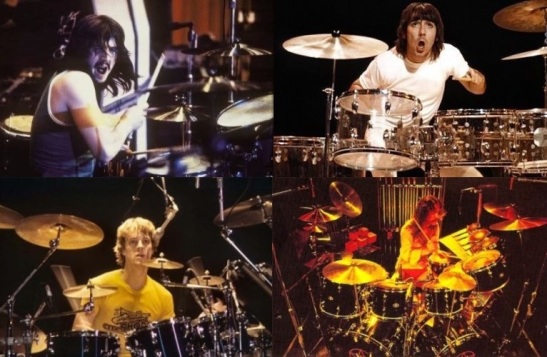 65 comments on “YOU RIP, YOU SHRED – My Favorite Drummers Part 1”