[Welcome to Thirty Year Thursday, the weekly series on my favorite albums of 1986, which now shifts to the releases I didn’t discover until after 1986] 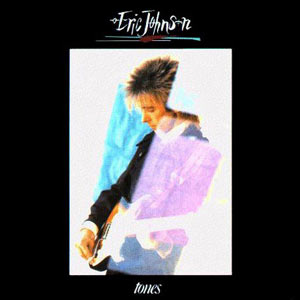 There aren’t many guitar virtuosos who are also accomplished singer-songwriters, but Austin, Texas native Eric Johnson is one such rarity. While his contemporaries, like Joe Satriani and Steve Vai (both of whom would later form the 3-headed guitar colossus G3 with him), had musos & guitar geeks foaming at the mouth with their virtuosity & diversity, most of their best-loved material was instrumental since neither possessed a commanding voice. Johnson, on the other hand, could write melodic songs that featured strong lead vocals and jaw-dropping guitar work, making his discography more well-rounded than the majority of his fellow six-string shredders. When his ‘70s band Electromagnets failed to set the world on fire, he became an in-demand session guitarist, and a memorable appearance on the Austin City Limits TV show in 1984 led to a record contract with Reprise/Warner Brothers. Although his sole album for that label, Tones, has long been considered his debut, he had previously completed a long-lost independent album in 1978 that wasn’t officially released until 20 years later. Tones, however, is where he introduced the distinctive sound that made the music world take notice; a combination of fluid guitar work with a variety of styles and (obviously) tones, driven by the killer rhythm section of bassist Roscoe Beck and drummer Tommy Taylor (and augmented with Fairlight synths & other programming courtesy of producer David Tickle).

Comparisons could be made between this trio and fellow Texans Stevie Ray Vaughan & Double Trouble, but while SRV used blues as a launching pad for his sonic assaults, Johnson’s combo weren’t as easy to pigeonhole, blending elements of blues, jazz, fusion, pop, etc. into a brew that was wholly their own. I was fortunate to see both of these guitar greats in concert and they 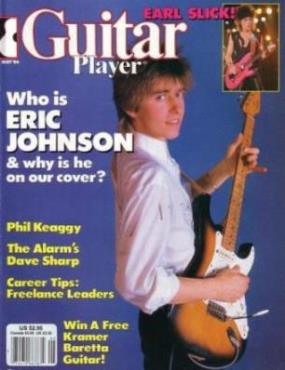 were equally incredible. The best-known track on Tones is “Zap,” a fast-paced instrumental rocker showcasing the talents of all three musicians, which was nominated for Best Rock Instrumental at the following year’s Grammy Awards. Two other vocal-free tracks, “Soulful Terrain” and “Desert Song,” demonstrate Johnson’s well-rounded guitar skills. The former blends elements of smooth jazz with a driving beat, as he extracts multiple sounds from his axe and delivers a blistering solo, while the latter is a beautiful acoustic guitar showcase. “Friends” begins with tribal percussion (reminding me of another versatile guitar god, Adrian Belew) before morphing into a subtly syncopated midtempo song with smooth-yet-slightly-gritty vocals. There’s also an almost metallic instrumental section with a searing guitar solo. “Emerald Eyes” features a similar rhythm, but with a super-catchy chorus and a running time under 3:30 it could have been a radio hit. “Off My Mind” was released as a single (with the aforementioned “Zap” as its b-side) and it’s easy to hear why. The fast-driving rhythm, sharp guitar sound and catchy melodies made it the most radio-friendly song on the album. His songwriting on this one reminds me of The Smithereens, whose ‘60s British Invasion-indebted music is echoed in the lyrics, “over, under, sideways, down,” likely a reference to The Yardbirds song of the same name. “Trail Of Tears” is another winner, with a great melody at “Hundreds of nights, oh my body cries, a trail of tears.” “Bristol Shore” might be a little too long at 6:40 (the longest track on the album), but that’s a minor complaint about a song that moves from pretty ballad to a more propulsive groove, with another incredible solo and a section where the guitar sounds like a Japanese koto. Johnson’s most successful album, the Grammy-winning Ah Via Musicom, which was my introduction to his music, was still four years away. Tones may not possess its successor’s notoriety but it’s an equally rewarding listen that deserves a wider audience, and it holds up extremely well 30 years later.