I’ve never been a fan of the term “guilty pleasure” even though I understand the concept behind it. When it comes to music, you can only admit to enjoying certain artists or songs that are deemed “uncool” or “cheesy” by using those two words or appreciating them ironically. Perhaps I was guilty (no pun intended) of using that term when I was younger, but for most of my adult life I’ve unapologetically enjoyed many such artists even when certain friends rolled their eyes at me.

Of course, one person’s guilty pleasure is another’s favorite, and you should never have to justify your enjoyment of anything for fear of being mocked…even though you should always be prepared for it. I consider myself fortunate that I’ve always absorbed various styles & genres like a sponge, and I’m constantly seeking out new & previously-undiscovered music, so I never place limits on what I might like or dislike. In this post I’ve highlighted several examples of artists that you might not expect me to like, and in some cases even I’m perplexed by how much I enjoy them. Feel free to mock me for some or all of my choices, but I’m proud to consider myself a fan with absolutely no guilt.

Artist: SPANDAU BALLET
In 1983, when Spandau Ballet hit the airwaves in the U.S. with their now-ubiquitous hit single “True” from the album of the same name, my favorite artists were Led Zeppelin, The Who, The Rolling Stones, Pink Floyd, Rainbow, Triumph, The Cars, Pretenders and many other rock & new wave bands (and 3+ decades later that’s still the case with most of them). Why would I want to listen to this

slick British pop band that looked like a lounge act in their video? That was also the year I got my first record store job and this album was in heavy rotation. It didn’t take long for the songs to grow on me and I quickly realized that lead singer Tony Hadley possessed one of the purest voices I had ever heard. I followed their career right through their split at the end of the decade, and I even purchased later solo albums by Hadley and main songwriter Gary Kemp. I could never put my finger on why I love this band so much, but all these years later I’m still thrilled whenever I hear songs like “Gold,” “Only When You Leave,” “How Many Lies,” “Highly Strung” and “Through The Barricades.” It’s possible that my gateway to their smooth, sophisticated “New Romantic” sound was Joe Jackson’s fifth album, Night And Day. I had been a fan right from the start, and his ever-changing music helped me to open my ears at an early age. Regardless of the reason, I’m proud to be a “Fandau.”

Artist: HANSON
What’s that? Rich likes the “MMMBop” kids? When that song took over radio & MTV in 1997 I was as dismissive as any non-teenybopper. Sure, every generation needs their Monkees and Menudo, but even I had to acknowledge that it was pretty cool to see 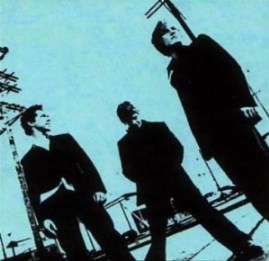 three young siblings singing, playing instruments and writing or co-writing their own songs (it’s the same reason I always rooted for Debbie Gibson even though I was never a fan). Three years later, with the release of This Time Around featuring appearances from respected musicians John Popper (from Blues Traveler) and Jonny Lang, I started taking them more seriously. They’ve subsequently released several more albums on their own independent label, and fans of melodic power pop would find a lot to like on those records. Perhaps the Blues Brothers-inspired video for “Thinking ‘Bout Somethin’,” which is embedded below, will convince some skeptics. Singer/keyboardist Taylor Hanson increased his musical credibility with the one-off supergroup Tinted Windows (previously featured in my One And Done series) which included Adam Schlesinger (Fountains Of Wayne), James Iha (Smashing Pumpkins) and Bun E. Carlos (Cheap Trick). Hanson is the reason I no longer dismiss teen idols, since they could potentially grow up to become legitimate artists. Sure, most of them won’t, but now I know it’s possible.

Artist: CULTURE CLUB
I like Culture Club but not nearly as much as Spandau Ballet. They both burst onto the scene at around the same time and their music shared a similar sensibility. What set Culture Club apart, of course, was the flamboyant presence of lead singer Boy George. As a heterosexual teenager in 1982, a cross-dressing lead singer was not 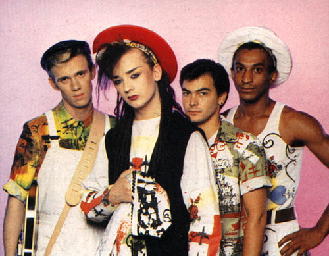 likely to get a positive reaction from me, and “Do You Really Want To Hurt Me” was a little too effeminate for my tastes (although I’ve since come around to it, mostly thanks to the Adam Sandler movie The Wedding Singer). Then they won me over with the gorgeous follow-up single, “Time (Clock Of The Heart),” and I became even more of a fan thanks to three singles from their second album: “Karma Chameleon,” “It’s A Miracle” and “Miss Me Blind.” By the next album I began losing interest (probably at the same time the band did as well), and I currently own only a single best-of CD that’s split between Culture Club and Boy George singles. They’re certainly more of a “compilation” artist for me, but those early singles are great examples of ‘80s pop at its finest, and Boy George is a much better singer than he’s given credit for.

Artist: BARRY MANILOW
Barry Manilow is another of my “compilation” artists. I don’t need to own each of his albums, but his 1978 Greatest Hits collection, which gathers together 19 of his best-loved songs, captures every

Manilow song I could ever want to hear. “Weekend In New England” and “Mandy” are surely two of the best pop ballads of the ‘70s, “Copacabana” is pure, silly fun, “Ready To Take A Chance Again” will always transport me back to seeing the Chevy Chase/Goldie Hawn movie Foul Play multiple times, and the version of “Daybreak” he performed on his TV special (joined by children, senior citizens and animated wildlife) is one of the most bizarre & unintentionally hilarious videos I’ve ever seen. Too bad it’s not currently available to view online. I don’t consider myself a “Fanilow” but I’m happy to have this one CD in my collection.

Artist: PETER CETERA
For many years, Peter Cetera has been one of my favorite singers. Beginning with his groundbreaking work as a member of Chicago from the late-‘60s through the early-‘80s, his unmistakable vocals have constantly brought a smile to my face. For some reason Chicago gets very little respect from critics & many rock fans, probably because they ended up having so many hugely successful hits with sappy ballads, but just based on the records they released

during their first decade they should be a lock for the Rock & Roll Hall Of Fame. Instead, the average fan seems to have forgotten how original they were, as they straddled the line between FM (album tracks) and AM (hit singles) radio. As a solo artist, Cetera gets even less respect, and in many ways I can understand why. ‘80s hits like “Glory Of Love” (from The Karate Kid, Part II) and the Amy Grant duet “Next Time I Fall In Love” are middle-of-the-road pop…yet his vocals make them special for me. It’s a cliché, but I could literally listen to him singing names from the phone book and still enjoy it. I know I won’t convince anyone of his greatness, but his 1981 self-titled debut solo album contained the non-ballad Rock radio hit “Living In The Limelight,” and his 1992 album World Falling Down deserves to be mentioned among the great breakup records of all time.

Artist: ALANIS MORISSETTE
When Alanis Morissette became an instant megastar thanks to 1995’s uber-platinum Jagged Little Pill and its 6 hit singles, I was 29 and not really interested in an “angry young woman” yelling about her ex-boyfriend. At least that was my initial reaction to “You Oughta Know.” Her music was everywhere and I couldn’t care less…

until I heard the refrain “It’s like raaaiiinnn…on your wedding day” blasting from a co-worker’s radio. When I learned it was her #1 single “Ironic,” I decided I should give the album a shot, and I was amazed at how much I got into it. Her songwriting partnership with producer Glen Ballard resulted in an album that works from start to finish, and it holds up two decades later. She has continued to release excellent records since then, several of them as strong as Jagged Little Pill (most notably 2002’s Under Rug Swept) and I’ve marveled at the consistency of her songs (even after she & Ballard went their separate ways) and the way she handled her lightning-fast rise to fame with grace & humility.

Artist: THE CARPENTERS
I was very young during the heyday of The Carpenters throughout the early- to mid-‘70s but their music was everywhere, including my sister’s record player. They were as uncool as it gets and I had a sense of that even back then. Of course, as I got older I started to appreciate some of their songs, and around 20 years ago I picked up the Carpenters Collection CD from Time-Life and reassessed their

music. The first thing that struck me was Karen Carpenter’s pure, heartbreaking voice, which never involved vocal histrionics or unnecessary embellishments. She simply sang what the song required, and her brother Richard consistently wrote some good ones for her to sing. Yes, they’re often mushy & sentimental, but her yearning vocals never fail to draw me in to even the sappiest song. 1970’s pop doesn’t get much better than “Rainy Days And Mondays,” “(They Long To Be) Close To You,” “Superstar” and the song that always makes me think of my sister, “Top Of The World.” The Carpenters get bonus points for releasing two excellent Christmas albums that get played in my house every year during the holidays.

Artist: HUEY LEWIS & THE NEWS
Here’s an artist that’s been inextricably tied to a decade that many music fans don’t take seriously. Between their multi-platinum albums Sports and Fore! (in 1983 & 1986, respectively), as well as the #1 theme song from 1985’s Back To The Future (“The Power Of Love”), most people probably think of Huey Lewis & The News as a relic from that plastic decade, but I strongly disagree. These guys have roots going back into the ‘70s, with ties to Thin Lizzy and Elvis Costello, and their first two albums are fun & quirky new wave gems 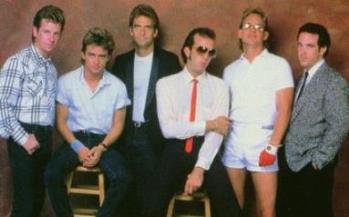 just waiting to be rediscovered. Their instrumental prowess is always impressive (especially drummer Bill Gibson) and they have to be one of the best vocal bands of their (or any) era. Just listen to their a capella song “Naturally” for proof. The records they released after their commercial peak were jam-packed with should-have-been hits and album tracks that took them into diverse musical terrain. Most importantly, Huey’s voice is a joy to hear. It’s somehow rough-as-sandpaper and smooth-as-honey at the same time, and his love of singing (and harmonica playing) comes through in every note. I hope the hipsters eventually come around and make Huey Lewis & The News cool for the first time but, whether or not that ever happens, I will continue to profess my love for their entire discography.

I hope I haven’t lost anyone’s respect after these admissions of not-guilty-at-all pleasures. I’m sure many of my readers listen to certain artists that they’re too timid too admit, and I encourage everyone to proudly acknowledge them…consequences be damned. Please share names in the Comments section. Of the artists discussed above, I’ve already seen two of them in concert, and I will be seeing two others over the next couple of months. Can you guess which ones?