For her final album of the ‘90s, the decade when she became a superstar, k.d. lang released Drag (1997), a concept album of cover songs based around cigarettes & smoking. The image of lang in a striped suit & cravat gave the album title another meaning, in a similar but more subtle way than her countrymen Rush did with their 1981 album Moving Pictures (search for the front & back covers of that album to see what I mean). As I’ve pointed out in my previous posts, lang has always marched to

the beat of her own unique drummer, so even though her record label probably wished for a return to the smooth adult contemporary sounds of Ingénue, her fans were more than happy to join her as she once again followed her muse.

Like Shadowland, her earlier collection of country covers, Drag utilizes a mostly muted musical palate as the backdrop to her gorgeous vocals. For many years I’ve described this album to friends as the quintessential k.d. lang album, since her voice is close to perfection from start to finish, but as I’ve rediscovered the remainder of her catalog I realize that she doesn’t have one definitive album. To fully appreciate all the things that make her a great artist you need to hear her tackle the various genres covered throughout her discography. Drag is still a fantastic record that drew me in the first time I heard it and, even though the concept doesn’t always hold together, her ability to breathe life into these songs from various songwriters over many decades is remarkable.

♪     “The Air That I Breathe” – A slow & powerful cover of The Hollies’1974 hit single, featuring an astounding vocal performance. It’s a long track that doesn’t overstay its welcome.

♪     “My Last Cigarette” – A slow waltz with weepy steel guitar co-authored by three songwriters, including two whose work as recording artists I’ve loved for many years: Gary Clark (of Scottish band Danny Wilson) and Boo Hewerdine (of English band The Bible and longtime solo artist). A haunting track with perfectly controlled vocals.

The only time I’ve had the pleasure of seeing k.d. lang live was during her tour in support of Invincible Summer (2000), an album that can only be described as her

“happy in love” record. I don’t actually know about her personal life at the time, but based on the album artwork, title and the uplifting nature of the music (even on the slower songs) I can only imagine that things were going well for her. Until a couple of weeks ago I hadn’t played it in several years, and I recalled most of the music being more upbeat than it actually is. Some of the highlights are more subtle than I remembered, yet the use of programmed drums, synths and some retro touches make this a unique entry in her discography. It’s also a return to original songwriting, something she wouldn’t do again for another 8 years. There aren’t quite as many great tracks here as have appeared on her strongest albums, but the highlights are among the best songs she’s ever recorded. Had she recorded this as her immediate follow-up to Ingénue it might have been a much bigger hit.

♪     “The Consequences Of Falling” – The only song here not written or co-written by lang. It’s stunning modern pop with those silky vocals leading the way. I love the hook at, “My hands tremble, my heart aches…is it you calling?”

♪     “Summerfling” – This was the first song I heard from the album; an exuberant slice of ‘60s-inspired sunshine pop with a great blend of organ & strings. It’s instantly accessible, fun and unlike anything she had recorded to that point.

♪     “Simple” – An instant keeper; short & memorable, like a daily prayer or affirmation (“Love will not elude you, love is simple”). The arrangement is, fittingly, simple yet interesting, and I love her sweet falsetto. This is as close as she comes to sounding like Sarah McLachlan (that’s a good thing for me). 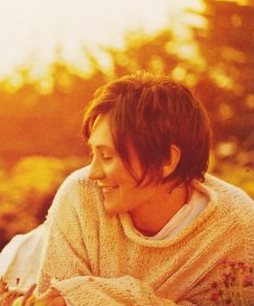 In December 2000, lang performed live for the A&E Network, taking requests over the phone (and possibly from audience members, although I don’t remember details of the video broadcast). Early the following year she released Live By Request (2001), an audio document of that show with all crowd interaction and song introductions omitted. Although those elements are missed I suppose they work better in a visual format, and as a CD of live performances it’s impossible to find any faults. Six

of her studio albums are represented by 12 songs, with two others originally appearing on soundtracks. Ten of these songs appeared on my “Essentials” lists for those albums, making this as close to a perfect overview of her discography as I can imagine. I love how she moves effortlessly from the retro-pop of “Summerfling” to the bawdy country nugget “Big Boned Gal” and into the stunning ballad “Black Coffee”…and those are just the first three songs. “Don’t Smoke In Bed,” a song that didn’t merit a mention in my discussion of Drag, is much more impressive in this live setting; a fittingly smoky late-night ballad that’s nearly as much of a showstopper as the song I’ll highlight below. The only new-to-me song here is “Barefoot,” which originally appeared on a 1991 soundtrack. It’s a very pretty jazz/country ballad with breathier-than-usual vocals. It’s very good but not a standout track. She closes out the show with the 1-2-3-4 punch of “Constant Craving,” “Wash Me Clean,” “Pullin’ Back The Reins” and “Simple,” giving the people what they want (literally, as these were all chosen by her fans). The highlight here, as is usually the case whenever she performs it, is a cover song that she made her own a long time ago:

♪     “Crying” – Roy Orbison helped put k.d. lang on the map in the ‘80s when he chose her to duet on his classic epic ballad, and every version I’ve ever heard her perform has sent chills down my spine. Her showstopping performance here is no exception. It’s a shame that she didn’t include a studio version on any of her albums, which could have given her a major hit. The only singer I can think of who would have brought the same power & emotion to this song is Elvis Presley, and in many ways lang is the second coming of the King Of Rock ‘N’ Roll.

Many artists in the back half of their careers decide to tackle the “Great American Songbook” as a way to appeal to mainstream listeners with songs that have been covered dozens of times. It’s usually a low-risk, high-reward proposition, and even though some may lose credibility among their oldest fans (I’m looking at you, Rod Stewart), it’s hard to fault them for wanting to visit songs that have stood the test of time. Naturally, k.d. lang handled this approach in her own special way, by collaborating on an album of duets with Tony Bennett while she was still in the prime of her career. A Wonderful World (2002) is not merely a collection of random oldies, but instead a tribute to the great Louis Armstrong, who recorded all of these tracks at some point during his career. There’s nothing truly inspired to be found here, but hearing those two one-of-a-kind voices together elevates even the lesser songs. Producer T Bone Burnett steps aside and lets the vocals take center stage with a small jazz combo behind them. My only complaints are that the two of them spend more time trading off verses & choruses than they do harmonizing, and there are three songs that only feature one of them. Otherwise, it’s a very enjoyable album with many noteworthy songs but I probably won’t be revisiting it that often.

She certainly covered a lot of musical ground on the three studio albums discussed here. One of the things that makes her catalog so enjoyable to revisit is the sheer diversity she’s shown throughout her career. I’m eager to find out if other fans feel the same way or if they would have preferred that she stuck to one particular style or genre. Starting tomorrow, I’ll be spending time with her three most recent studio albums and a career-spanning anthology as I prepare to wrap up this series. I’ll be back with my final post whenever I’ve given them the attention they deserve.