[KamerTunesBlog presents B-Sides The Point, where I occasionally write about smaller artist catalogs, or even compilations and box sets, in a single post instead of revisiting the entire recorded output of a particular artist over numerous posts, which is the main purpose of this blog. As I’ve stated before, think of these as the palate cleansers between the main courses.]

Syd Barrett was a founding member of Pink Floyd; the lead vocalist, guitarist, main songwriter & overall guiding light through the early years of their career, including their incredible debut album, The Piper At The Gates Of Dawn. When I first discovered Pink Floyd in 1977, however, I was still a few years away from learning about their history. For my 11th birthday I had received a copy of Rock And Roll Over by Kiss, my favorite band at the time, and since I already owned that album (and the rest of Kiss’ discography) I was able to visit my local record store & exchange that gift for something new. I had a couple of options in mind, two bands I had heard of but never listened to: Led Zeppelin & Pink Floyd. The Zeppelin section had too many choices and I didn’t know which one to go with, while the Pink Floyd section surprisingly had only one of their albums: the recently-released Animals. I went home with that record and my mind was subsequently blown. Within a couple of years I also bought The Dark Side Of The Moon, Wish You Were Here and The Wall as soon as it was released. 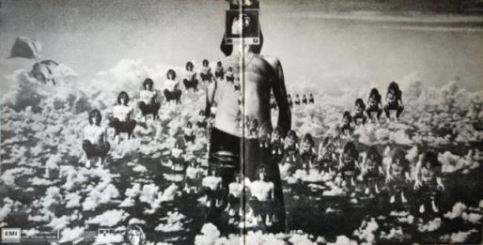 It wasn’t until a few years later, during high school, that I delved deeper into their discography, and I was always perplexed by that debut album which was so drastically different than anything else they recorded. Over time my appreciation for it grew until I loved it as much as their other classics, but I always considered the Syd Barrett-era Pink Floyd to be a completely different band than the one that most people think of when they hear that name. Barrett’s songwriting was a quirky combination of childlike whimsy, psychedelic freak-outs and more than a touch of menace. Once you hear a Syd Barrett song it sticks with you; melodic hooks mingle with sonic weirdness. It’s almost like he had the ability to write a straightforward Beatle-esque pop song but always felt compelled to turn it on its head, and there’s nothing wrong with that since it made his quirky writing style so unique & memorable. Unfortunately, a combination of mental instability, a multitude of illicit substances and general unreliability eventually forced the band to fire him in 1968. They stumbled for a couple of years before morphing into one of the biggest recording artists of all time (and probably my 2nd favorite band behind…you guessed it…Led Zeppelin). Barrett, on the other hand, had a short-lived solo career that resulted in only two studio albums before he withdrew from society to live a secluded home life until his death in 2006. Those albums, as well as a couple of subsequent releases of his solo material, are the focus of this post. Anyone who is new to the world of Syd Barrett should absolutely check out Pink Floyd’s The Piper At The Gates Of Dawn before anything else, as well as the handful of early non-LP singles they released, but once you’ve been hooked these solo releases are a real treat.

Barrett’s debut, The Madcap Laughs (1970), had a complicated recording history, going through a handful of producers in ’68 & ‘69 before bandmates Roger Waters & David Gilmour came on board to tie things 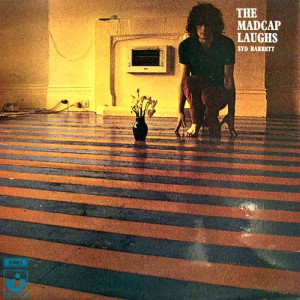 together. Of the 13 tracks, 6 are credited to Malcolm Jones (then head of Harvest Records) and the others to Waters & Gilmour, although original producer (and Pink Floyd’s co-manager) Peter Jenner had a lot to do with getting this project off the ground. Of his two albums, this one is more consistent but neither is easy listening and I can imagine many listeners being turned off by the offbeat songs and Barrett’s often deadpan vocal delivery. Those who fall under its spell, myself included, are rewarded with an incredibly strong album that gets better with age. In fact, more than half the songs are as essential as anything on Pink Floyd’s debut. The only caveat is that you need to be in the right frame of mind to really enjoy it. There have been times I’ve had to turn it off within a few minutes, while other times I’ve played it again as soon as the record ended. Your mileage may vary, but there’s no doubt that The Madcap Laughs is a special collection of music from a one-of-a-kind talent.

♪     “Terrapin” – Slow, sleepy & slightly weird, with strummed acoustic & subtle lead guitar and a quirky hook at “Well, oh baby, my hair’s on end about you.” The lyric-heavy section with “floating, bumping, noses dodge a tooth the fins a luminous” is similar to his work with Pink Floyd. It’s a strange but fitting track to open the album as it showcases the weirdness to follow. It’s also the longest song at 5+ minutes.

♪     “Dark Globe” – Over a pretty strummed acoustic guitar he sings in a heavily accented voice, straining his range at “My head kissed the ground, I was half the way down.” That vocal, as well as “Won’t you miss me? Wouldn’t you miss me at all,” was clearly an influence on Roger Waters’ singing style.

♪     “Octopus” – Carried along by a loping rhythm, choppy acoustic guitar and half-spoken double-tracked vocals with lots of non-sequitur lyrics, and “So trip to heave & ho, up down, to & fro” gives it the feeling of a work song. It’s one of the most inviting songs on the album, straightforward but quirky, with a great chorus: “Please leave us here, close our eyes to the octopus ride.”

♪     “Golden Hair” – Using lyrics based on a poem by James Joyce, Barrett plucks out a haunting 5-note guitar riff . The eerie sound (vibes? keyboard?) that mirrors his low vocals creates a cool atmosphere, and the cymbal splashes with mallets add to the effect. “Lean out the window…goooolden hair” is a stark ending. It’s less than 2 minutes but leaves a strong impression.

♪     “Long Gone” – A bluesy/folky tune with a stark & captivating descending melody at “She was gone, gone, the bigger they come…” The organ-heavy section where he sings “And I stood very still by the window sill” with double-tracked vocals could easily be a Pink Floyd song from ’69 or ’70, probably the closest to what they might have sounded like with Barrett still in the band.

♪     “If It’s In You” – Begins with a false start where he goes way off key at “thi-i-i-inkin’.” Once the actual song kicks in the hooks arrive when he extends words like “thinking,” “tighter” and “wink” in a voice on the verge of cracking. It’s not pretty and probably sounds like nails on a chalkboard to some listeners, but it’s always been a highlight for me. The childlike rhymes in the rest of the song are a treat (“Henrietta…mean go-getter…write her a letter”). 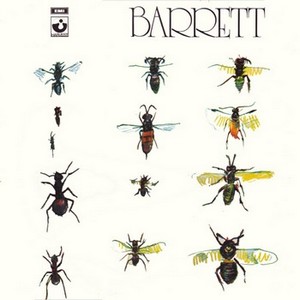 Recording started after The Madcap Laughs was completed and the record was released later that same year. Even though it was written, recorded & finished in a much shorter amount of time than its predecessor, it’s actually a slightly less focused document of where Barrett’s head was at the time…or, more likely, he was less focused, leaving producers David Gilmour & his Pink Floyd bandmate Richard Wright to oversee production and keep things as tight as possible. There are probably a number of fans who prefer this sophomore effort, but I don’t think there are as many killer songs this time. It’s still an excellent album, as 8 of the 12 songs are noteworthy.

♪     “Baby Lemonade” – Begins with a 40-second instrumental of Barrett playing a Byrds-like chiming guitar before organ & acoustic guitar join in. It might be his most focused & accessible song. It’s hypnotic & offbeat yet still a great introduction to his music. I like how the steady drums enter for the chorus of “Please, please, Baby Lemonade.”

♪     “Gigolo Aunt” – A bouncy, quirky pop shuffle, with Wright’s organ work being a particular highlight. It includes possibly his most fully formed chorus (“Yes I know what you are, you are a gigolo aunt…”) and his lead guitar work is excellent. In fact, the instrumental sections feature some really interesting & enjoyable playing from everyone involved. This song was also the inspiration for the name of an excellent ‘90s power-pop band, Gigolo Aunts.

♪     “Wined And Dined” – A melodic love song with soft, heartfelt vocals (“Wined…and dined…oh it seemed just like a dream”). It’s a subtle, under-produced gem with his slide(?) guitar & voice being the main focal points. In a more fleshed out version this could be fantastic, but as is it’s a keeper.

Nearly two decades would pass before additional recordings made by Barrett during the ’68-’70 recording sessions would see the light of day via the release of Opel (1988), a collection of alternate takes, demos & a couple of previously-unreleased songs. This one is really for the die-hards and certainly not the place for anyone to start their Syd Barrett collection. Like any similar collection of such archive material it’s not nearly as cohesive as a proper studio album, but after listening to it numerous times this past week, more than half of the 14 songs continued to grow on me and are worth discussing. There’s nothing truly essential here, however, but it gets bonus points for that dark & somewhat disturbing image of Barrett on the album cover.

I couldn’t imagine not owning all three albums discussed above, but for anyone interested in just the cream of the crop you can’t do much better than The Best Of Syd Barrett: Wouldn’t You Miss Me? (2001). This CD

includes 22 tracks: 7 from The Madcap Laughs, 9 from Barrett, 4 from Opel, 1 from The Peel Session (a BBC radio broadcast that I don’t own) and 1 previously unreleased track to entice collectors. Overall the song selection is excellent, covering the majority of my “essential” and “notable” songs. Of the two songs I didn’t already own, “Two Of A Kind” (from that Peel session) is an inessential but pleasant folky pop tune. The other song was the big selling point and is worth noting in more detail.

As I mentioned above, any Syd Barrett collection should begin with his contributions to Pink Floyd, but once you’ve enjoyed those recordings there’s a lot of excellent music to be found during his brief solo career. I’m eager to hear other fans’ opinions on these records, as well as the reaction from people who never heard him before reading this post. It’s not always easy listening but it’s immensely rewarding once you enter his world. Also, since his lyrics are often hard to follow, I highly recommend this web page which includes complete lyrics for all of his songs:
http://www.pink-floyd.org/barrett/sydlyrics.html