XTC Part 1 – Thoughts On An Artist / This Is Pop

XTC is a band that I was aware of in high school but I didn’t hear a note of their music until their controversial single “Dear God” got some serious radio play in 1986. Even then I didn’t buy any of their albums, but having worked in three different record stores I was familiar with their interesting album covers (one of them was simply small white text on a black background while another had a green paper bag hiding the actual cover, like Led Zeppelin’s In Through The Out Door) and always remained curious about what they sounded like. It wasn’t until 1989’s Oranges & Lemons that I finally checked out an XTC record and it quickly became one of my all-time favorite albums. In fact, I made sure that one of the songs from that album (“The Loving”) was played at my wedding. Within a year I bought the rest of their catalog and continued purchasing nearly everything else they released after that. 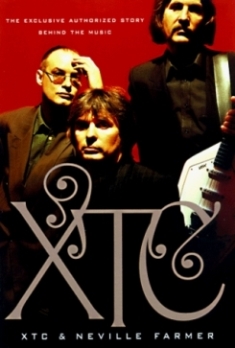 If you’ve been following this blog, you know that my goal is to rediscover the lesser-played artist catalogs in my collection, so in some ways I’m cheating a bit with the XTC discography because I’m already familiar with so many of their songs. However, I have a few good reasons for choosing them now. Looking at the track listings of all the albums recently, I only recognized about 30% – 40% of their songs by title. Also, it’s been at least 10 years since I played them with any regularity. The biggest reason, though, is a book called Song Stories (subtitled The Exclusive Authorized Story Behind the Music), co-written by the band with author & XTC fanatic Neville Farmer, that I purchased in ‘98 or ‘99. It functions as a musical autobiography, a behind-the-scenes story of each album and a song-by-song discussion with three key members of the band: main songwriter/singer/guitarist Andy Partridge, songwriter/singer/bassist Colin Moulding and longtime lead guitarist Dave Gregory. I started reading this book a few times over the last 13-14 years, but I knew it would make more sense to read it while I immersed myself in their music, and that hasn’t happened until now. Wherever it’s applicable, I’ll incorporate any interesting tidbits of information I learn from the book into my posts. They may not be a household name like some of their contemporaries, but they’ve influenced a couple of generations of musicians who continue to emulate their quirky songwriting, clever wordplay and ever-evolving musical adventures.

Before Dave Gregory joined the band, they released two albums with the original lineup of Partridge, Moulding, manic keyboard whiz Barry Andrews and underrated drummer Terry Chambers. The first of these was White Music (1978), produced by former Abbey Road engineer John Leckie, who perfectly captured their youthful energy on a record that at times reminds me of Talking Heads, Television, early Roxy Music, Be Bop Deluxe, Skids, The Jam and Devo. Andy’s songs are the standouts since Colin’s songwriting abilities were still developing. “Radios In Motion” starts things off with a steady driving rhythm, stabbing guitars and squawking vocals. I love the super catchy pre-chorus (“All the kids are complaining that the songs are too slow”). “This Is Pop” switches from angular verses to melodic choruses, as the title finds Andy answering the question: “What do you call that noise that you put on?” Great answer. “Statue Of Liberty” is the highlight for me, with its slightly funky groove and Barry’s organ washes & accents. Andy’s over-enunciated vocals can be grating at first but the fantastic melody makes them easy to overlook & eventually embrace.

Other notable songs include “Into The Atom Age” (bouncy pop with swirling organ and a great hook at “I’m heading into the atom age, da-da-da da-da”), “New Town Animal In A Furnished Cage” (in under 2 minutes they convey a feeling of suburban boredom in the guise of a sparse, quirky pop tune) and “Spinning Top” (written by Andy in 1975 and

compared…for some strange reason…to The Rocky Horror Picture Show, this dance-y song has a super cool groove with great bass & drum interplay and offbeat organ accents). “I’m Bugged” deserves special mention. Although they were going for a creepy vibe, it’s still very catchy yet slightly off-kilter. It features a sparse arrangement & tight harmonies when they sing “I’m bu-u-ugged.” Andy’s vocals remind me of Bryan Ferry on early Roxy Music songs like “Virginia Plain,” and the B-52’s-esque space-age organ adds another interesting element. My CD copy features 7 songs not included on the original album. Of these, only “Science Friction” held up after numerous listens. It strikes a perfect balance between the offbeat paranoid verses and the catchy pop choruses (“science friction burns my fingers”). “Heatwave” is worth mentioning mostly because it was produced by Robert John “Mutt” Lange, who would go on to produce some of the biggest albums of all time (by AC/DC, Def Leppard, his ex-wife Shania Twain, etc). I like Colin’s deeper vocals at “Oh no, can it be, we’re heading for a heatwave.” The remaining album tracks and bonus material showcase their youthful exuberance, so even the lesser songs are fun to hear.

Their sophomore album, Go 2 (1978), isn’t as infectious or consistent as its predecessor, but it does boast at least half a dozen memorable tracks. “Battery Brides (Or Andy Paints Brian)” starts with a moody 95-second instrumental intro that’s hypnotic yet slightly dissonant. Singing about supermarket checkout girls whose minds are elsewhere, Andy’s

vocals are more subdued than anything on the previous record. I really like the descending keyboard run at “ba ba ba ba battery brides.” “Crowded Room” is the first of Colin’s songs that I really enjoyed. It’s also the first of two songs where he addresses his paranoia about violence at the band’s gigs. It has a wild punk/new wave energy, a catchy chorus (“faces in a crowded room” and “they’re pushing me out”) and a great sense of dynamics. “The Rhythm” is another strong Colin song, written after he saw Saturday Night Fever. It features a straight-ahead beat that’s muted in the verses & brighter in the choruses (“he has the rhythm in his head”), the latter being the main hook along with Barry’s Eno-esque synth washes. Andy made his first foray into mixing with his song “Life Is Good In The Greenhouse,” giving it a hushed atmosphere that masks his angry lyrics about being cut off from society…or possibly from a woman. I love the “ha-ha ha-ha ha-ha” intro, but at 4:40 it could’ve used some editing.

“Jumping In Gomorrah” is a brief blast of fun with an excellent percussive rhythm and bouncy bass line. Years before he offended some religious groups with “Dear God,” Andy’s humorous lyrics here (“J-u-m-p-i-n-g, jumping…I’m religion-free”) had a similar effect but on a smaller scale. “I Am The Audience” is another Colin song dealing with violence at their live performances. I love the stomping beat with chant-like group vocals in the chorus, as well as Barry’s use of organ, piano & clavinet. Speaking of Barry, two of his compositions appear on this album: “My Weapon” and “Super-Tuff.” Although they both have their own unique charms, his quasi-Ian Dury cockney accent has them sticking out like two sore thumbs among Andy’s & Colin’s compositions. This disparity in songwriting, and Andy’s desire to steer the XTC ship, led to Barry’s exit from the group after this album. He would go on to form the band Shriekback. I’ve only ever heard their Natural History: The Very Best Of Shriekback compilation so I’m far from an expert, but he was clearly a talented musician & songwriter who needed to lead his own project. I’m sure some of their original fans were upset at his departure, but XTC might never have developed into the influential band they became had he remained with them.

“Are You Receiving Me?” was a single release that’s included in the middle of my CD. It’s also the catchiest song here, with a great scratchy guitar sound and cheap organ tones. Their record company, Virgin Records, hired well-known producer/engineer Martin Rushent to produce this track (John Leckie returned for the rest of the album) and he delivered a wonderful single that’s the highlight of this disc for me. Sadly it wasn’t a chart success, even in their homeland of England. Not to worry, though; within a year the UK record-buying public caught on to the charms of XTC. In my next post I’ll discuss the progress they made over the next few albums, which I’ll be playing numerous times this week. As for the first two albums discussed here, I wouldn’t consider either of them essential but there are enough great songs on each that stand on their own while also pointing to even better things on the horizon. I’m curious to find out if there are any fans who consider White Music and Go 2 among their best work, especially anyone who was a fan from the start. Please share your thoughts in the Comments section below. Thank you.

[One additional note: After posting this, I discovered an excellent XTC fan site that I’ll be visiting throughout this series. It’s called Chalkhills.org, and I highly recommend that you check them out]