[A brief explanation of my Compilation Or Catalog? series: Although I tend to be a completist, owning everything an artist has released, occasionally the only album I own is a compilation. This can often be a stepping-stone to exploring more of their work, but sometimes a “Best Of” or “Greatest Hits” is the only thing I’ve heard. With this series I ask my readers to let me know if the compilation I have is sufficient or if there are specific albums I should check out. Normally I revisit the entire recorded output of a particular artist over numerous posts, which is the main purpose of this blog, but this gives me an opportunity to learn more about some lesser-known & less-explored artists in my collection]

Jimmy Buffett might be the most successful one-hit-wonder artist in the history of recorded music. I’m not disparaging him by using that term, since he cleverly named his original best-of compilation Songs You Know By Heart – Jimmy Buffett’s Greatest Hit(s) (1985). Although he’s a successful businessman, author and concert attraction, he’ll always be best known for the ubiquitous 1977 hit, “Margaritaville.” Having heard the song countless times during my high school & college years and at every bar throughout young adulthood & beyond, I didn’t think I ever needed to hear it again. Sure, it’s a catchy song that immediately evokes the feeling of guzzling tropical drinks at a beach resort, but after drunkenly singing it with friends throughout my early 20s I felt like I had exhausted my interest in the song. I bought Songs You Know By Heart on CD in the late-‘80s so I could check out the rest of his “best,” yet it’s probably been sitting on the shelf for more than 20 years since the last time I gave it a spin. Last week I heard “Margaritaville” on the radio while I was shaving and found myself enthusiastically singing along (thankfully without any nicks or cuts), so it seemed like the perfect time to revisit this compilation and see how it holds up. I’ve played it a number of times since then and was pleasantly surprised by how much I enjoyed it. There are several songs that capture a similar laid-back tropical island vibe to his most popular number, but a lot of the songs made much more of an impact on me than I had expected.

“He Went To Paris” is a folky, early-‘70s singer-songwriter tune that could be Kris Kristofferson with a smooth voice. Steel guitar gives it a country twang, and the melancholy music & lyrics (about an old man looking back on a life where “some of it’s magic, some of it’s tragic, but I had a good life all the way”) could work in a number of

genres. “Son Of A Son Of A Sailor” has a similar feel with more melancholy lyrics, and the various sound effects and lyrical content display the nautical theme that runs through much of his music. “A Pirate Looks At Forty” is a country-tinged ballad with hints of James Taylor’s soft-rock style. I like the way the music slowly builds while maintaining a subdued atmosphere that perfectly suits the lyrics about a sailing man who wishes he had lived in pirate times. Fans of the upbeat yet laid-back style of his biggest hit are probably drawn to “Cheeseburger In Paradise” and “Fins.” The former has funny lyrics about his love for “a big warm bun and a huge hunk of meat…that American creation on which I feed.” I especially like the percussion/handclap section (“I like mine with lettuce & tomato…”). The latter has cute lyrics equating sharks with men circling a single woman at a bar. The rockin’ harmonica solo would’ve fit nicely on an early Huey Lewis record.

“Come Monday” is one of my new favorites: a country-ish ballad with sweet strings & steel guitar. The melody at “I spent four lonely days in a brown LA haze & I just want you back by my side” is gorgeous, as is the bridge (“I can’t help it honey you’re that much a part of me now”). This could’ve been a hit for Glen Campbell during his commercial peak. “Changes In Latitudes, Changes In Attitudes” is another fun, peppy song, displaying a humor through life’s ups & downs (“If we couldn’t laugh we would all go insane”). The country shuffle of “Why Don’t We Get Drunk” (“and screw”) is a blast if you’re drunk at a bar or seeing Jimmy Buffett in concert, but its appeal is limited on record after the first couple of listens…even though the musicianship is fantastic. “Pencil Thin Mustache” is a super catchy little tune that sounds like a cross between Arlo Guthrie’s “Alice’s Restaurant” and Leon Redbone.

“Grapefruit – Juicy Fruit” shows a bluesy/jazzy side of Buffett’s personality that I hadn’t expected, especially at “And oh it gets so damn lonely when you’re on a plane alone.” The 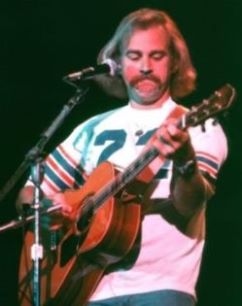 music really swings in the instrumental section. The last two songs here, “Boat Drinks” and “Volcano,” are a blast even if they’re minor when compared to the other 11 songs. The former has a Caribbean vibe blended with a melody that recalls The Archies’ “Sugar Sugar,” while the latter’s calypso feel and goofy, sing-along arrangement could pass for a kids’ song.

All of the songs on this compilation come from six of the seven albums he released between 1973 & 1979. The ones that had the biggest impact on me were mostly from the earlier records, but there was plenty of enjoyable music from the latter records as well. Looking at his discography is a bit intimidating, as he has released more than two dozen studio albums and another dozen live recordings. I’m not sure I’ll ever be a “Parrot Head” (the affectionate description used to describe his most ardent fans), but I’m sure there are plenty of other Jimmy Buffett songs I would enjoy. This is where I’m asking my readers to

help me out. Are there any particular albums that are essential/definitive? If not, which are the strongest that I can use as a starting point? Perhaps the 4-CD box set from 1992, Boats Beaches Bars & Ballads, would be a sufficient summary of his career for me? Based on some reviews I’ve read, it’s a well-chosen collection that covers all of his best material, broken down into the four themes described in the album title. I’m sure there are fans who think everything he’s released is great, while others probably think Songs You Know By Heart is more than enough. Whatever your level of interest or knowledge of his catalog may be, I’d love to hear from you so I can decide what my next Jimmy Buffet purchase should be. I’m eager to hear your thoughts on the 13 songs discussed here, and I look forward to your feedback on the rest of his catalog. Thank you.

UPDATE, DECEMBER 14, 2013: Since I posted this “Compilation Or Catalog?” entry in April, many passionate Jimmy Buffett fans have chimed in with recommendations on how to further explore his catalog. A handful of people were content with the single-disc Songs You Know By Heart CD that I’ve owned since the ‘80s, but most agreed that the 4-CD Boats Beaches Bars & Ballads box set would be the next logical purchase. Fortunately it was available for a very reasonable price, and I ordered it along with his 2-CD live album from 1978, You Had To Be There, which was suggested by a few people. I also found a copy of Living And Dying In ¾ Time on vinyl during a recent record shopping excursion. The box set covers a broad range of his work through 1989, and the live CD showcases a wonderful (and highly underrated) performer/storyteller with a top-notch band of musicians. I’ve listened to both of these sets twice and already consider myself a bigger fan. If I come across some of his earlier albums on vinyl I will probably pick them up, but for now I’m content with my small Jimmy Buffett collection. Of course, that leaves him somewhere between Compilation and Catalog, but it’s clear to me now that his single-CD Greatest Hit(s) merely scratched the surface and I’m glad I finally checked out more of his work. Thanks to everyone who shared their recommendations, especially those who confirmed that the box set was the perfect next step for me.

This entry was posted on April 8, 2013 by KamerTunesBlog (by Rich Kamerman) in "Compilation Or Catalog?", JIMMY BUFFETT and tagged cheeseburger in paradise, jimmy buffett, kamertunes, kamertunesblog, margaritaville, music, music blog, rich kamerman, son of a son of a sailor, songs you know by heart.