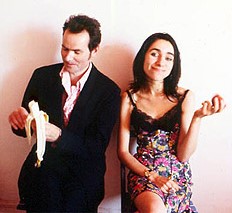 In the late-‘80s, prior to forming the band (and later going solo as) PJ Harvey, Polly Jean Harvey was a member of the group Automatic Dlamini, whose founder & musical mastermind was John Parish. I’ve never heard anything from that group, and apparently the only recordings that feature Harvey remain unreleased, but Parish has gone on to contribute various instruments and production duties to several of Harvey’s albums. They have also released two albums as a duo, with Parish providing the music and Harvey contributing lyrics and lead vocals. Until two weeks ago I had never heard either of these albums. I’m not sure why I hadn’t checked them out, since I’m enough of a PJ Harvey fan to own all of her officially released albums, but something always kept me from buying them. Fortunately, a friend recently copied them for me, and after playing each album several times between Christmas & New Year’s, I knew I had to discuss them here. These are not the experimental, avant-garde recordings I had expected. Instead, they fit neatly into her catalog even though Parish wrote all the music. This makes sense since she tends to change her musical style with each album anyway, so it would be hard to discern who contributed the music and lyrics without looking at the album credits. Note that I’m skipping the chronology of her catalog with this post, since I felt these two records should be discussed separately.

Their first album together, Dance Hall At Louse Point (1996), was credited to John 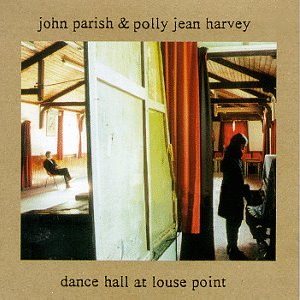 Parish & Polly Jean Harvey. Released a year after her critical & commercial breakthrough, To Bring You My Love, that billing gives me the sense that she wanted to be more incognito here, but once you hear her voice there’s no doubt that she’s in complete command. “Girl” is a 90-second haunting guitar instrumental, with Harvey’s angelic voice floating in and mirroring the guitar line. “Rope Bridge Crossing” is a super slow acoustic shuffle with Parish delivering some off-kilter (but lovely) Marc Ribot-esque lead guitar. Harvey doesn’t come in until about 1:45, and she alternates between hushed, semi-spoken and high-pitched vocals. There’s a surprisingly lilting melody at “I’ll be a lady, wait through it all. Be there to catch you after the fall.” “City Of No Sun” has a chugging rhythm with strumming & chiming guitars split between the left & right channels. She delivers a striking vocal performance, with call-and-response between muted low-end and screeched high-end. “That Was My Veil” is one of my two favorite songs here. It has a simple arrangement that sounds like the two of them in an intimate acoustic guitar and vocal performance (with the exception of the organ solo). I especially like the catchy chorus: “That was my veil, that was my time, once held secret but now lies.”

“Civil War Correspondent” is bass/organ heavy, and reminds me of those moody end-of-album tracks U2 used to include on their ‘80s albums. It slowly builds but always retains its brooding quality. This song didn’t immediately strike me but I liked it more each time I heard it, and I love the heartbeat feel during the “gun-fire, gun-fire” ending. “Heela” has a great slow, dark, bluesy, bass-heavy groove, while her vocals give off a grunge-y vibe. Parish alternates vocals in the middle section, a nice counterpoint to Harvey’s voice. My only complaint about this song is that it doesn’t really go anywhere, but it still has a cool feel that I enjoyed. My other favorite song is their version of the Peggy Lee ‘60s hit, “Is That All There Is?” (written by legendary songwriters Jerry Lieber & Mike Stoller). I honestly never paid attention to the lyrics before, even though I was familiar with the original hit recording, so the first couple of times I played this version I assumed the lyrics had been modified to darken it up and modernize it, but those are the original lyrics. It’s a combination of maudlin and uplifting, with the singer referring to a house fire when she was a child, a disappointing trip to the circus as a 12-year-old and her first love, always asking the question, “Is that all there is?” before deciding, “Let’s break out the booze and have a ball if that’s all there is.” It’s a stirring performance made even more chilling when you focus on the subject matter.

Album closer “Lost Fun Zone” is a brief song with bright rock ‘n’ roll electric guitar, and Harvey singing “I believe…I am here to stay” and “Take me one more time” in a high voice. The rest of the album is good but doesn’t reach the highs of the songs I’ve already discussed. With two new classics and 4-5 other memorable tracks, I’m really glad I gave this album a chance.

Thirteen years later, they released A Woman A Man Walked By (2009), this time credited to PJ Harvey & John Parish. The approach is basically the same, but the 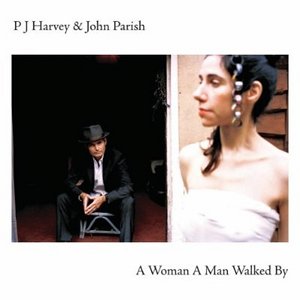 instrumentation, most notably Parish’s use of banjo and ukulele, sets it apart from its predecessor. Album opener “Black Hearted Love” is the only full band song, featuring a guest guitarist, bassist and drummer. Although it’s a bit too long at 4:40, I love the stop-start rhythm in the verses and the cool guitar figure in the choruses. “Sixteen, Fifteen, Fourteen” is a stomping acoustic country blues, a direct descendant of Led Zeppelin’s third album. It features subtle use of banjo and has a great hook at “Erica…Erica.” One of my favorites has to be “Leaving California,” with Harvey lamenting her time in that state and longing to return to her native England. There’s great tinkling piano and her super-high falsetto (“Cal-i-for-nee-ya”). I really love the haunting guitar & organ textures. It’s not listed in the credits, but what sounds like a Mellotron adds a prog-rock element to this tune, and my friends & readers will know what a selling point that is for me.

“The Chair” has an excellent drum pattern, with various tempo, rhythm and mood shifts. There’s nothing super catchy about it, but the song is all about “feel,” as well as harrowing lyrics about a mother who mourns her drowned son (“Pieces of my life are gone, washed away in the water that took my son”). “April” has a memorable organ melody and slightly fractured vocals (“April won’t you answer me? These days just seem to crush me”). “A Woman A Man Walked By/The Crow Knows Where The Children Go” begins as an angry, Nick Cave-esque song with Harvey turning the tables on a man who wronged her (“I want his f**kin’ ass, I want your f**kin’ ass”), followed by a 2-1/2 minute instrumental that moves along like a chugging train. “The Soldier” is a sparse lullaby with high, breathy vocals & dark lyrics, featuring ukulele as well as plinking piano in the chorus (“Send me home restless, send me home damaged and wanting”). Another of my favorites is “Pig Will Not,” all loud guitars and yelled/distorted vocals (“I…I will…I will not!”). I love the tom-tom heavy verses with Harvey barking “woof woof.” I’m not sure what this one’s about, but I like the anger & defiance in her voice, most notably at the repeated “I will not” refrain. This is a solid collection of songs, with at least four that I really love, and even the least memorable songs have elements that I enjoy.

I’m pleased that I was able to spend some time with these records, and I will definitely get 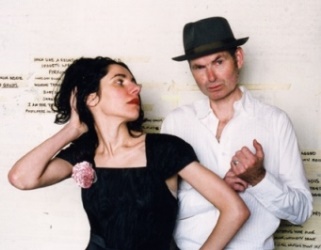 my own copies to add to my collection. Hopefully this post will help expose them to other PJ Harvey fans who also dismissed them, as they shouldn’t be overlooked. I’ve already begun listening to her three most recent albums, as well as a collection of her BBC sessions, all of which I’ll discuss in my next post when I wrap up the PJ Harvey discography. I look forward to discussing them with you soon.

This entry was posted on January 2, 2013 by KamerTunesBlog (by Rich Kamerman) in PJ HARVEY and tagged a woman a man walked by, automatic dlamini, dance hall at louse point, is that all there is, john parish, kamertunes, kamertunesblog, music, music blog, pj harvey, polly jean harvey, rich kamerman.