I suppose you can’t begin a discussion about Foo Fighters without mentioning Nirvana, the influential grunge trio that included drummer Dave Grohl. After the death of Nirvana frontman Kurt Cobain in 1994, it was hard not to empathize with Grohl and bassist Krist Novoselic. Without their singer/guitarist, the best they could’ve hoped for was to somehow continue making a living playing music, but the chances of reaching the commercial & critical heights of their previous band were pretty slim. It’s difficult to imagine achieving such success and then having it end so abruptly, especially at such a young age (Grohl was only 25), not to mention experiencing the loss of a friend and bandmate. To the best of my knowledge, Novoselic continued with music but kept a low profile. Grohl, however, turned his attention to recording songs that he had written before & during his time with Nirvana…songs that eventually got him signed to a major label record deal. Somehow the wild man drummer with hair flying all over the place was also a very good guitarist & songwriter. What began as a personal project to share with some friends eventually became a world-conquering band of his own.

Personally, I was never a huge Nirvana fan. I thought some of their songs were excellent, and I was immediately impressed by their sense of dynamics (due in no small part to Grohl’s surprisingly sensitive drumming), but they were never an important band in my life and I didn’t see Cobain as the spokesman for my generation (I was 28 when he died, so perhaps I was a little too old for that, although many of my friends felt differently). As a music fan who prefers melody over sonic aggression, and technical ability over attitude, they were never going to be my favorite band. When the first Foo Fighters record appeared, I was skeptical that it would be anything more than a vanity project, especially considering that Grohl played all the instruments except for one guitar part. I’m a drummer, and I knew the success rate for drummers becoming frontmen was pretty low, but I remained curious and I heard enough good songs with melodic hooks that I kept my ears open. I bought each successive album upon release and there were always numerous songs that I thought were great, but like Nirvana before them they never became more than a band I liked listening to from time to time. Although I own the entire officially-released Foo Fighters catalog, I’ve probably only listened to each album a handful of times until this past week. My goal now is to delve into their discography a few albums at a time, really get to know the songs, and maybe I’ll become a more devoted fan in the process. There’s a reason I’ve continued buying each record and rooting for their continued success, so I’m surprised it’s taken me this long to focus so closely on their music. Hopefully this gives you a little background into my history with Foo Fighters, and you can see that I’m not a fanboy. All of my comments about their songs and albums will be based on my 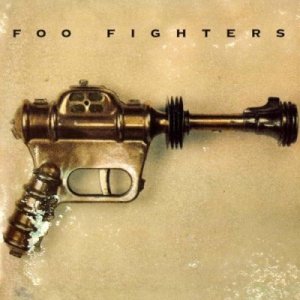 impressions as I listen to them numerous times. I’ve already begun by spending the past week with their first two albums, and I was impressed by how much they grew on me with each successive spin.

As I mentioned above, the debut album Foo Fighters (1995) was essentially a Dave Grohl solo album. The songs were written over a number of years but the album is sonically cohesive and certainly doesn’t sound like the work of just one man. The record opens with “This Is A Call,” a melodic slab of Nirvana-esque rock where he shakes off the doldrums he had been stuck in since Cobain’s death (“this is a call to all my past resignations”). “I’ll Stick Around” is less aggressive and even more melodic, but there’s a lot of anger in the lyrics (“How could it be I’m the only one who sees your rehearsed insanity?”). The major hook, which could’ve also been the title, occurs at “I don’t owe you anything.” I’ve read that this song was directed at Cobain’s widow, Courtney Love. “Big Me” is a lovely melodic pop song. At just over 2 minutes long it doesn’t overstay its welcome, and it’s great to hear the joy in his voice. Although I usually don’t like my musical opinions to be affected by videos, it’s hard to separate this song from its video counterpart: a  parody of those goofy Mentos commercials.

“Alone + Easy Target” is classic ‘90s rock; a slightly grungy tune that’s similar to early Stone Temple Pilots. The hook at “head is on, I want out, I’m alone and I’m an easy target” is hard to ignore. “Good Grief” and “Weenie Beenie” are two loud, driving songs that didn’t make much impact on me, although I enjoy the way he sings “comes and goes,” “the wind blows,” etc.,  during the former. “Floaty” is one of my new favorites here. The acoustic guitar intro and ¾ rhythm set it apart from the rest of the album, and I like the quick shifts to a faster tempo. To me this has a Smashing Pumpkins vibe, at least musically speaking. I love the effect on his voice, as well as the melody when he sings “that’s not as big as what’s flown around here.”

“For All The Cows” is a subtle little ditty, with light cymbal work & mellow guitars, until the middle section (“My kind has all run out”) when it picks up for 15-20 seconds. I love the clean guitar tone and his mostly hushed vocals. “X-Static,” the only song to feature another musician (Greg Dulli of Afghan Whigs), includes a long fuzzy guitar intro and the whole thing has a somewhat trance-like quality as it never shifts gears, musically or vocally. The title shares a name with a Hall & Oates album; I wonder if that was intentional. I also think it might be a commentary on his post-Nirvana situation, with a reference to “nevermind” and lyrics like “leaving all my senses numb is heaven.” The album closes with “Exhausted,” the longest song at nearly 6 minutes. The music is raw and distorted, while his hushed & melodic vocals are a nice counterpoint. There’s a great breakdown filled with guitar feedback in the middle before it returns to the original groove. I noticed that this is the only song that fades out, while all the others have a distinct ending. There are also a couple of songs I didn’t mention. Neither of them is bad, and I enjoyed elements of both, but my goal here is not to address every song on every album…just the ones that have a particular impact on me, positive or negative. Overall I think this is a great album, made even more so because it’s really a demo recording by one man that sounds as good as any band from that era.

Foo Fighters did not succumb to the sophomore jinx on the next record, The Colour And The Shape (1997), this time recorded by the band Grohl put together to tour the debut: 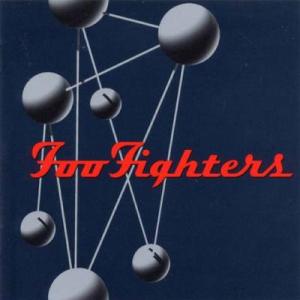 Pat Smear (guitar), Nate Mendel (bass) and William Goldsmith (drums, although Grohl re-recorded most of his tracks). Beginning with the soft lullaby feel of “Doll,” the album kicks into gear with “Monkey Wrench,” a perfectly produced and brilliantly executed ‘90s rock song. The music is super tight, the tune is immediately catchy, and I love the rhythmic shifts, stops and starts. What a great pre-chorus (“One in ten” repeated several times) before the sing-along chorus (“Don’t wanna be your monkey wrench”). “Hey, Johnny Park!” is not as densely arranged, adding some breathing room to the album. I really like the alternating call-and-response vocals (“It’s impossible”/“I can’t let it out”), and the way his voice shifts from soft & sweet to loud & throat-shredding. I’m not sure about the title, and there’s no distinct chorus, but who cares: this is simply a great rock song. “My Poor Brain” has a soft steady beat and slightly falsetto vocals. There’s a great hook at “This is a blackout, don’t let it go to waste,” and his heavy drum pattern adds some nice accents. This song comes across as an apology (“I wish that I could change, I can’t save you from my poor brain”), although he might be apologizing to himself. I don’t love everything about “Wind Up,” as parts of it comes across as generic, but the melody at “I want a song that’s indelible like manimal, I hope you never see me wind up” is a winner.

“My Hero” has become one of their standards, and it’s easy to see why. Between the deep tom-tom rhythm, splashy cymbals, fuzzy guitar and tight arrangement, it could’ve been a hit even without vocals. However, his unique take on the concept of a “hero,” focusing on everyday people doing amazing things for others (“there goes my hero, he’s ordinary”), make this a song with universal appeal that will probably speak to future generations. “See You” is a wonderful change-of-pace; a light, poppy, jazz-tinged song. It’s short & sweet, with a great walking bass line and a different quality to his vocals. This may not be to everyone’s taste, but I found myself looking forward to it each time I played the album.

“February Stars” begins super soft & slowly builds until a peak almost 3 minutes in, and features one of their most powerful endings. His vocals at “February stars, floating in the dark” certainly owe a debt to Scott Weiland of Stone Temple Pilots. “Everlong” is moody & powerful, with a fast 16th-note hi-hat driven groove, and is perfectly suited for arena sing-alongs and blasting from your radio as you drive down the highway. There’s nothing new or groundbreaking about this song; it just sounds awesome, and it’s a surprisingly 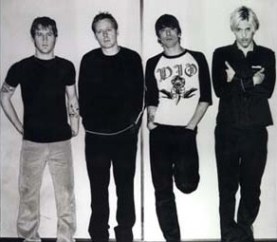 effective love song (“I wonder when I sing along with you, if everything could ever feel this real forever”). “Walking After You” is a slow, dreamy, acoustic guitar-led ballad with soft vocals (“I’m on your back”), and a great hook at “If you walk out on me, I’m walking after you.” It’s hushed and beautiful; a necessary respite from the harder edge of most of the album. Like its predecessor, this album closes with the longest song, “New Way Home.” It never fully caught my ear, except for the section with “I’ll never tell you the secrets I’m holding,” as well as the crescendo at around the 4-minute mark (“I’m not scared…”).

Once again, like the debut album, most of the songs here are instantly memorable and hold up after numerous listens. Had I been a teenager when these albums were released, Foo Fighters would’ve undoubtedly been among my favorite bands. There aren’t many bands that started their career with a one-two punch as strong as Foo Fighters did. 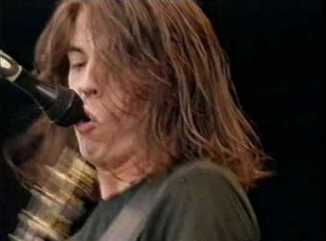 Song-for-song they’re as consistent as anyone from that era. This week I’ll be focusing my attention on their next few albums. I don’t remember much about them other than the radio hits, but I’m very eager to see how they compare with the first two. With the addition of Taylor Hawkins (a drummer who was good enough to allow Grohl to focus his energies on guitar, vocals and songwriting) and lead guitarist Chris Shiflett, they finally settled on a steady lineup that continued (with the later return of Pat Smear) until the hiatus that the band is currently on. I look forward to hearing from fans who know their music better than I do. All of the artists I’ve previously written about here began their careers in the ‘60s or ‘70s, and their fans tend to be older (in their 40s, like me, and 50s), so it’ll be nice to hear from some younger fans who will likely have a different perspective. Thanks for stopping by.