The first couple of times I listened to Forbidden (1995), the final Black Sabbath album with vocalist Tony Martin, I didn’t think much of it. Martin’s once impressive vocal range wasn’t the same as it had been on earlier albums like The Eternal Idol and Headless Cross, and the songs weren’t terribly memorable. After listening again this week, I still don’t think it’s a very good album, but it does include a few gems. A couple of notable facts: Tyr’s rhythm section of Geezer Butler and Bobby Rondinelli was replaced here by former Sabbath members Neil Murray and Cozy Powell, and the album was produced by Ernie C of the band Body Count, rapper Ice-T’s heavy metal outfit. Opening track “The Illusion Of Power” has that classic Sabbath rhythm (super slow and heavy) and a dark guitar tone. Martin half-sings/half-talks his vocals, and the catchiest section is the chorus with low harmonies on “Illusion of power.” Ice-T adds a brief spoken word section, which surprisingly isn’t out of place. “Can’t Get Close Enough” is a pretty decent hard rock song. The first 1:20 is just a circular guitar pattern and vocal, then transforms into a stomping 4/4 rhythm for the remainder of the song. “Shaking Off The Chains” has two distinct verse melodies (I prefer the one with “This is not for the weak of mind…”), and the chorus has a fast, galloping, Iron Maiden-esque rhythm. I like this one. “Rusty Angels” has a great chugging riff with a cool flourish at the end. It’s more AOR than metal and has a catchy chorus (“Rusty angels, they can’t fly…”).

[Black Sabbath – “Shaking Off The Chains”] 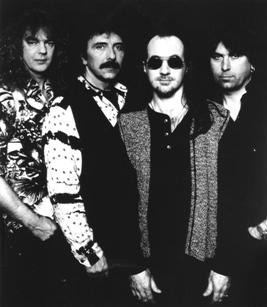 The remainder of the album is decent, but by now we’ve heard it all before. There are no instrumental or vocal surprises, and the riffs are good but mostly uninspired. “Get A Grip” sounds like early-90s Aerosmith, who ironically released an album by that name in 1993. The lyrics are pretty dumb and the melodies are forgettable, although I did enjoy the “gotta get a grip, gotta get a hold on life” section. “I Won’t Cry For You” is the obligatory power ballad. Martin sounds good in the pre-chorus (“And it feels like someone’s treading on your shadow”), but the chorus is too repetitive. “Guilty As Hell” has a nice guitar riff from Tony Iommi, but is otherwise nondescript. The shuffle beat and Powell’s killer drum intro on “Sick And Tired” were a nice change of pace. The title track, “Forbidden,” has that Rocky IV inspirational feel, musically speaking. The lyrics are inane, but for a hard rock song with a pop sheen it’s not bad. Album closer “Kiss Of Death” should be more enjoyable. It’s a 6+ minute epic with various peaks and valleys, but it’s all been done many times before. I like that it ends quietly, which was a nice touch. I doubt I’ll be revisiting this album much in the future, but I’m glad I gave it some attention now to see how the Tony Martin era came to a close. He still had a powerful voice, but the effortless high notes from earlier albums seemed to be out of reach by this point. I can’t see anyone but Sabbath loyalists really enjoying this record.

In 1997, the original lineup of Tony Iommi, Ozzy Osbourne, Geezer Butler and Bill Ward reunited for a tour. A year later they released a 2-CD souvenir, Reunion (1998), recorded at the second show in their hometown of Birmingham, England. I bought this when it was 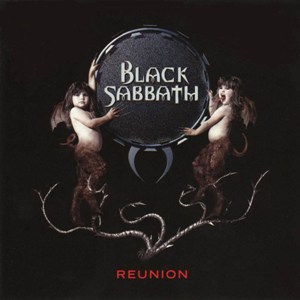 released, even though I was only a fan of a few of their albums, and I remember being impressed by how good they sounded after all those years apart. I assumed they doctored some of the recordings in the studio, but listening to it again this week I could hear several flaws (mostly Ozzy’s vocals, which don’t always stay on pitch), so I’m convinced that this is as “live” as major label concert recordings get. Ozzy begins proceedings by screaming, “Yeah…you f**kers!” Throughout the show he sounds positively giddy to be singing these songs with Sabbath again. But it’s not just Ozzy who was inspired, as the other three members brought their A-games, and for the most part it’s hard to believe 18 years had passed since the four of them last played together (barring two previous one-off reunions). I like the way Ozzy trades off lines in the verses of “War Pigs” with the audience. There’s a nice brief bass solo at the end of “Behind The Wall Of Sleep” that leads into a massive “N.I.B.” A most-likely inebriated fan takes over the microphone at the end of that song, to which Ozzy replies, “What the f**k was that?” This was obviously not a slick, choreographed show, with the band and audience having a blast. They’re firing on all cylinders for “Sweet Leaf,” especially the fast section, and the inclusion of “Dirty Women” (from the much-maligned Technical Ecstasy) was a pleasant surprise.

Of the 16 songs they performed (or at least included on this package), 12 came from the first three albums, which is probably what most fans wanted to hear. Everything from “Black Sabbath” to “Fairies Wear Boots” to “Sabbath Bloody Sabbath” sounds as good as they ever did. They also wrote and recorded two new songs. “Psycho Man” begins with Ozzy singing in a low register, but once they get to the chorus (with Ozzy singing overlapping parts), it starts to sound like the real Black Sabbath. The lyrics here could be the basis for a horror movie (I assume they were written by Geezer), and musically they shift from a slow pace to a chugging groove (at “Playing in his twilight zone…”). It’s a decent song but certainly not a classic. The same could be said for “Selling My Soul,” which could actually pass for a mid-70s b-side or outtake. Once again, the lyrics (“I don’t read the holy books ‘cause they take me nowhere”) must have been written by Geezer. It would’ve been nice to see what else this lineup could come up with, but this live album was the only official document of their brief reunion.

In 2008, the lineup that recorded Heaven And Hell, Mob Rules and Dehumanizer (Iommi, Butler, Ronnie James Dio and Vinnie Appice) reunited under the name Heaven & Hell (to avoid confusion with the previously-reunited original lineup, although this was clearly Black Sabbath in all but the name). The only album they released before the shocking death of Dio in 2010 was The Devil You Know (2009). Having not been a huge fan of the Dio era when this album was released, I didn’t buy a copy then, but decided to check it out now and I’m glad I did. It certainly doesn’t reach the heights of those first two records, but 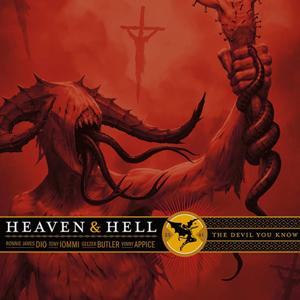 there are some killer tracks, and I’m constantly amazed by Iommi’s never-ending supply of monster riffs and how Dio’s voice retained its range and power even into his mid-60s. My only complaint is the incredibly slow pace of the majority of the songs, which becomes overbearing after a while. “Atom & Evil” is the first track, a thunderous tune that feels like a slow climb up a mountain, which is confirmed by lyrics like “Falling’s easy, rising will never be,” and Iommi delivers a really tasteful guitar solo.  “Double The Pain” has an amazingly heavy bass tone in the intro, a great pre-chorus (i.e. “Thunder and lightning, electric machines, these are the devils that shout in his dreams”) and a monster chorus. At first I wasn’t thrilled with “Rock And Roll Angel,” with only the guitar pattern in the chorus making an impression, but Iommi’s bluesy guitar solo, the heavier section that follows and the nylon string guitar at the end, make this a highlight of the album for me. “Follow The Tears” is another winner. The organ gives it an eerie feeling (and recalls Deep Purple’s Jon Lord), and the main hook comes when Dio sings the title along with Iommi’s guitar riff.

“Fear” features a guitar riff that’s as good as any that came before it, and the song has a slightly faster pace than the rest of the album. “Bible Black,” at nearly 6-1/2 minutes, could’ve used some editing. There’s a nice acoustic guitar intro, and I love the crushing electric guitar sound, but the tempo never changes and Iommi’s solo is good but not among his best. “The Turn Of The Screw” and “Eating The Cannibals” each feature solid playing,

but they’re both a little generic.  “Neverwhere,” though, is a little better. It’s more upbeat with a lengthy guitar riff, they slow things up for the bridge (“The hand that rocks the cradle in the morning…”), and then return to the faster tempo for the guitar solo. “Breaking Into Heaven” sounds most like classic early-80s Sabbath, with an incredible extended guitar riff and Dio’s awe-inspiring vocal performance. There are just verses for the first 3:45, when the first chorus finally comes in, followed by a typically killer guitar solo. The dark mood of the song prevails throughout, with no changes of pace (which is effective here). This was a great way to close out the album. The Devil You Know isn’t perfect; As I mentioned above, it could’ve used some changes of pace, especially within each song. The dark tone never lets up, which depending on my mood at the time could be good or bad. If I were to put together a compilation of Dio-era songs, several of these would make the cut, so it still has a lot going for it. It’s too bad we’ll never get to hear anything else from this lineup, as they clearly still had a lot to offer, but at least they left us on a high note.

So there you have it…the Black Sabbath catalog, 19 studio albums and 3 live albums stretching over nearly 40 years. When I began revisiting these albums about 6 weeks ago I was already a fan of their music, but I only really knew a couple of them. I also had never heard any of the Tony Martin-era albums, and a couple of those were eye-openers. There were also some less-than-stellar efforts along the way, but it was never a chore to listen to any of them. Perhaps if I were more of a metal head I would have enjoyed some of these records even more, but after a while it seemed like they were repeating themselves. As their career progressed I sensed a dip in quality, which is certainly understandable after so many releases and so many different musicians passing in and out of their ranks. During the later releases I found some excellent individual performances along the way, but none of them were solid from beginning to end. For a newcomer to Black Sabbath, it’s clear that the first 3-4 albums with Ozzy and the first 2 with Dio are great starting points. The Glenn Hughes-fronted Seventh Star is also a winner, and there are enough great Martin-era songs to fill a single-disc compilation (with Headless Cross being my favorite of those albums). I’m glad I finally got to know all of the music by this legendary band. Currently there are plans for the original lineup to reunite in 2012, but with Iommi battling cancer and Bill Ward’s status uncertain, there’s no way to know if this reunion will ever take place. I wish them luck, and if they do indeed record a new album I will eagerly await its release. But most importantly, I hope Iommi has a full recovery and gets back to being a riff machine soon.