Roxy Music’s first single, “Virginia Plain,” was a Top 10 hit in the U.K., but it wasn’t included on their debut album, Roxy Music (1972). Many artists did this in the ‘60s & early ‘70s, but usually the single was released prior to the album. In Roxy Music’s case, the single was actually recorded and released after the album hit the record shops. This was unusual, but after listening to the album numerous times, it’s obvious that the record company wanted a hit single and nothing on the album met that criterion. That they could deliver such an offbeat, infectious single after releasing a strange-but-excellent album is testament to their diversity…and to the quality of lead singer/keyboardist Bryan Ferry’s songwriting talent. “Virginia Plain” was eventually added to later pressings of the album, yet it’s unlike any songs on that debut release, being instantly catchy with the memorable hook of “What’s her name, Virginia Plain.” I hear a Frank Zappa influence on Ferry’s vocals, especially in the silly & sarcastic tone of lines like “Baby Jane’s in Acapulco, we are flying down to Rio.” Brian Eno’s synthesizer textures add a lot to the final verse as well.

The remainder of the album is not for the faint of heart. Produced by former King Crimson lyricist Pete Sinfield, there are numerous references to those progressive rock legends in much of the music. I was surprised to see that Bryan Ferry received sole songwriting credit on all the songs, as it seems like the other musicians (Andy Mackay on oboe & sax, Phil Manzanera on guitar, Graham Simpson on bass, Paul Thompson on drums, and especially the aforementioned Eno on “synthesizer & tapes”) had to contribute heavily to the dense musical palette on display. There’s nothing here that would be described as “pop” and it’s not an easy listen, but it’s a unique album that reveals itself more with each listen.

“Remake/Remodel” is a weird & wonderful start to the album, where each musician gets an instrumental spotlight. The lyrics don’t follow a standard verse-chorus-bridge structure, which is the case for almost all of the songs on the first three albums. If there’s a chorus here, it’s the word “CPL593H,” which is certainly not a typical sing-a-long. It also has a big ending, with everybody playing at full volume like the last encore at a rock concert. “Ladytron” follows with a minute-long spacey intro, but eventually turns into a hybrid of King Crimson, Pink Floyd, and even early Moody Blues. “If There Is Something” adds a country flavor, showing a possible David Bowie influence, and Ferry’s vocals get more manic as the song progresses.

I enjoyed the electric piano intro on “2HB,” Ferry’s homage to Humphrey Bogart and the movie “Casablanca.” His voice is softer here but still quirky, and the bass line really drives the song after that intro. “The Bob (Medley)” packs a lot into its 5 minutes and 45 seconds. It begins with a dark, ominous, almost Black Sabbath feel, followed by a quiet pastoral section and then gunfire, explosions and a military rhythm (all possibly on synths). A new melody is introduced with the line “Too many times beautiful” that really sounds like late-60s Moody Blues, then a solid guitar solo, followed by a quiet piano & oboe section with spoken words, and finally back to the original melody with an almost orchestral climax at the end. They packed in quite a lot here and I really like it.

“Chance Meeting” is scary, almost demented, but still didn’t make much of an impact on me. Neither did “Would You Believe,” which turns into a ‘50s rock ‘n’ roll song (with Chuck Berry-style guitar and a honking sax) while remaining off-kilter. “Sea Breezes” is another long song (7 minutes) with various instrumental and vocal sections. I enjoy the guitar squalls that seem to cut in & out of the production, but the song never feels grounded, making it hard to latch on to. The album ends with the brief “Bitters End.” Ferry’s abstract lyrics and vocal delivery carry the song, as it could be a capella, with only bells and a little sax added along with vocal harmonies. There’s a lot to like here, but I would consider this a very good rather than great debut album. 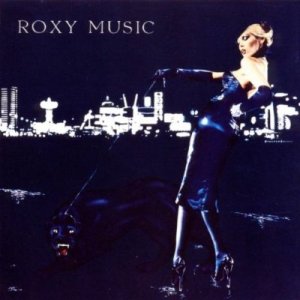 Their next album, For Your Pleasure… (1973), begins with the single “Do The Strand,” which is more instantly accessible than anything on the previous album. I wouldn’t call it “mainstream” especially with such abstract lyrics, and I was surprised to find out that it was not a hit at the time of release. It’s similar to David Bowie’s “Suffragette City,” which was released a year earlier. “Strictly Confidential” was a highlight for me. The AllMusic review of their first album refers to Ferry’s vocals as a “vampiric croon,” and nowhere is that more appropriate than this song. My favorite song on this album is “In Every Dream Home A Heartache.” Until I focused on the lyrics, I didn’t realize this was a song about an inflatable sex doll. The first half is slow & moody, but shifts gears after the line “…but you blew my mind.” After that it becomes a big, epic rocker, with a stinging Manzanera guitar solo and big drum fills, until it returns to the earlier slow tempo, but with an added phased production.

“For Your Pleasure” LP Gatefold

The other song that really made an impact on me is “The Bogus Man,” a slow moving but intense 9+ minutes. I like how Ferry goes into a high, almost falsetto voice, and the music itself is intense. I’m no expert on Krautrock, but it seems like they were influenced by that style here, especially on the extended instrumental outro. There are also a couple of straight-ahead (at least for Roxy Music) rock songs in “Editions Of You” and “Grey Lagoons,” although each song has enough twists to make them anything but generic. The last song, “For Your Pleasure,” has a sparse arrangement and a cool echo-y guitar sound, and comes across as Pink Floyd meets Gary Numan (although Mr. Numan wasn’t a recording artist yet, so he may have been influenced by this track). It ends with synths mimicking galloping horses (unless those are actual horses). Another strange yet enjoyable album. I’ve already listened to it many times, but I think this will continue to grow on me in the future.

Later that same year, they released Stranded (1973), their first album without Eno. With the addition of violin/synth player Eddie Jobson, there’s not a big shift in their sound, although some of the manic edges have been smoothed over. Opening track “Street Life” has a nice funky groove with dissonant sound effects, and is the first time they sound like the band I knew from hearing “Love Is The Drug” on the radio as a pre-teen. They even add a fast proto-disco section, but this is no dance song. “Amazona” is the first song co-written by someone other than Ferry, in this case Manzanera. I like the funky guitar-driven groove, but the vocals & music never real gel. “Psalm” seems to be a pro-religion song. I love how the music & vocals slowly build over its 8+ minutes, and I’m guessing a young Nick Cave was listening and taking notes.

“Serenade” is a great catchy tune in the David Bowie vein, and probably influenced a lot of Britpop bands in the ‘90s, like Blur and Suede. “A Song For Europe” begins as a slow, dirge-like version of The Beatles’ “While My Guitar Gently Weeps,” and has a traditional-sounding sax solo (as opposed to the more avant-garde approach of the prior albums). The highlight for me, and possibly my favorite song on all three of these albums, is “Mother Of Pearl.” It starts with some crazy vocals, where Ferry overlaps himself in a bizarre call-and-response, spouting more abstract lyrics. The song shifts gears at around the :40 mark into a slower, piano-driven groove, and his vocals become more conventional. I’ve probably been humming this more than any other song this past week. The album ends on a melancholy note with “Sunset.” The lyrics are seemingly about a sunset, but could he also be singing about the end of a relationship? Or the end of life? It’s deep but not somber, and a wonderful way to close out the album.

I enjoyed all three albums, but Stranded stands out as the most cohesive of the bunch. And how about that album cover? I love all the craziness that Eno brought to the first two, but I read somewhere that even he thinks this is their best album. Let me know if you agree, or if they lost you once Eno departed? Now it’s time to revisit the albums they released in the mid-70s. I’m looking forward to hearing how their sound progressed (or regressed?) as their popularity grew. I hope to post my comments on them sometime next week.