Talking Heads entered the ‘80s on an artistic & commercial high. They had survived their underground/punk beginnings, started to expand their sound, and slowly entered the mainstream. Their first album of the new decade was Remain In Light (1980), which had the quartet (David Byrne, Jerry Harrison, Tina Weymouth and Chris Franz) beefed up by additional musicians and vocalists. The most well-known track is “Once In A Lifetime” with its familiar refrain, “same as it ever was” (ironic, since their sound was no longer the same). The first thing I noticed about the album is that it only has 8 songs, with nearly half clocking in at 5 minutes or longer. Instead of the tighter new wave aesthetic of previous releases, the focus seems to be more about the groove this time. There are African rhythms throughout and all kinds of syncopated percussion, but they’re mixed with weird keyboard squiggles, sometimes sounding like an ‘80s video game (cutting edge at the time). They continue to incorporate funk, disco and reggae, creating a new sound that’s still distinctly Talking Heads. 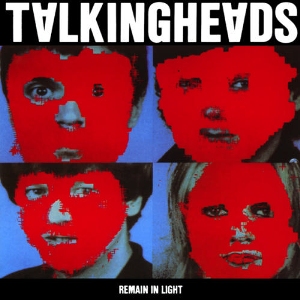 The album opens with two tracks that have great grooves: “Born Under Punches (The Heat Goes On)” and “Crosseyed And Painless.” The former owes a lot to the funk of James Brown and George Clinton’s Parliament/Funkadelic, while the latter incorporates an insistent disco/reggae hybrid groove; Tina Weymouth’s bass line & Chris Franz’s non-stop propulsive drumming must have made this a huge hit in dance clubs at the time. I love Adrian Belew’s squealing guitar solo on “The Great Curve,” a song I initially found less catchy than the two preceding tracks, but it eventually won me over. The first half of the album is stronger than the second half, but that doesn’t take away from the power of the album as a whole, which continues their streak of 4 excellent records. “Houses In Motion” reminds me of The Fixx’s “Deeper And Deeper” (a personal favorite, although it was never a big hit). “The Overload” is another dark, moody album closer (following in the footsteps of the previous album’s “Drugs”) that sounds like a very slow homage to The Beatles’ “Tomorrow Never Knows.” 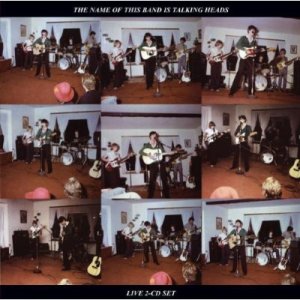 It would be 3 years before they released another studio album, so in the interim fans were treated to a double live album, The Name Of This Band Is Talking Heads (1982). I remember seeing this album in the racks at my local record stores, but never knew if it was a compilation or a live album. Apparently after several years the LP was deleted and didn’t see the light of day again until 2004’s CD reissue, when it was expanded to 2 full-length discs that would most likely have required a 4-record set in the ‘80s (imagine that). Disc 1 covers the tours they did as a quartet in support of the first three albums, and Disc 2 focuses on 1980’s Remain In Light Tour, where the band was augmented by six additional musicians & vocalists. Although the latter performances are more densely arranged, the difference between the two discs isn’t as jarring as one might expect. This is as good a primer on their first four years as any best-of collection, and shows the various facets of the band on stage

Conventional wisdom would have you believe that the essential Talking Heads live album is Stop Making Sense (1984), as the band was at a commercial peak, and the album was the soundtrack to a popular concert movie of the same name. While it’s certainly a great representation of the band at that particular stage of their career, there’s no doubt in my mind that The Name Of This Band… is the definitive document of Talking Heads in 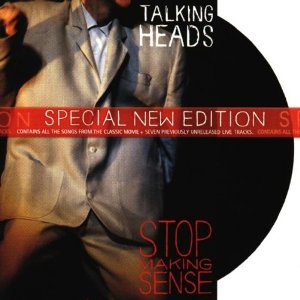 concert. That being said, the Special New Edition expanded version of Stop Making Sense, released in 1999, is worth checking out. Seven tracks are added to the original LP’s nine tracks, showcasing all of the songs that appeared in the movie, and replicates the sequence of songs performed in concert. The first four songs are mostly acoustic, almost like Talking Heads Unplugged, featuring just the original quartet. The remainder of the CD, with one exception, includes the expanded lineup. The exception I mentioned is “Genius Of Love,” the 1981 Top 40 hit (and #1 song on the U.S. Dance chart) by Tom Tom Club, a side project formed by Chris Franz and Tina Weymouth. I read that Tom Tom Club performed this song here in order to give David Byrne time to change into his famous oversized suit that became the key focal point in the movie. The CD is an excellent document of Talking Heads on tour in 1983, but none of the performances add anything to the original studio versions.

A year before the Stop Making Sense movie & soundtrack were released, the band emerged from hibernation with Speaking In Tongues (1983), their highest charting 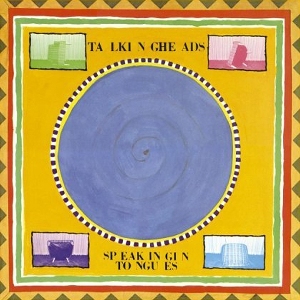 album that featured the U.S. Top Ten hit “Burning Down The House.” The combination of a tribal beat, pulsing synth bass line, David Byrne’s yelped vocals and the chanted song title were too much for the record-buying public to resist. They were obviously listening to Minneapolis favorites (and Prince protégés) The Time when they wrote & recorded the upbeat and incredibly catchy “Making Flippy Floppy.” No surprise that this is their only album to cross over to the R&B charts in the U.S. An excellent, slightly slower-tempo dance song is “Girlfriend Is Better.” It’s not dissimilar to their earlier song, “Life During Wartime,” and introduced the phrase “stop making sense.” “Swamp” comes out of nowhere, an unexpected surprise, sounding like a 1970’s ZZ Top song (with ‘80s production). The album closes on a mellow but happy note with the sweet sounding, bouncy “This Must Be The Place (Naïve Melody).” After two consecutive albums ended with brooding, serious songs, I enjoyed the change of pace here. There are 3-4 songs that didn’t make an impression on me, even after numerous listens, so although there are at least 4 songs that I really enjoy here, this is my least favorite of their albums so far. I’d certainly give it thumbs up, but it’s more flawed than any of their previous releases.

The surround sound mixes for Remain In Light and Speaking In Tongues are revelations, introducing sounds that had been hidden in the stereo mixes. Unlike the surround sound mixes of the first three albums, which merely beefed up the original mixes & spread them throughout the five speakers, these two were newly created mixes (by Jerry Harrison and E.T. Thorngren) that present the albums in a fresh light.

They recorded three more studio albums before calling it quits at the end of the ‘80s. I’ve already spent some quality time with them in the last 7-10 days, but now I want to check out the surround sound mixes. I’ll post my comments on these albums, as well as my final thoughts on Talking Heads, sometime next week.